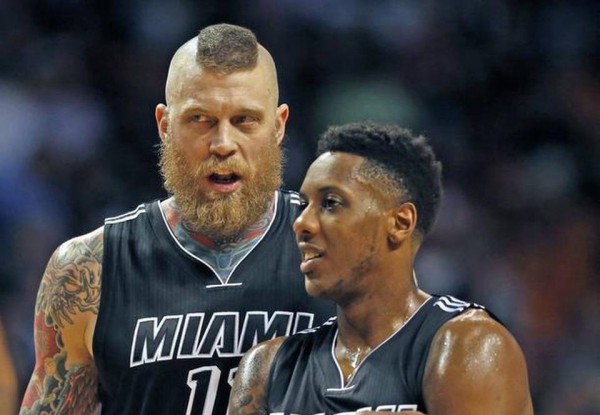 While speaking to the media earlier in the week, head coach Erik Spoelstra didn’t exactly give any assuring claims that the two veterans would last the entire season in Heat uniforms. Spoelstra was asked on whether he has spoken to Andersen and Chalmers about the trade rumors surrounding each of them this offseason:

“They’re both pros. They both have been with us through our best years and they understand our commitment to winning. Our owner and our president are committed to doing whatever it takes to win in this league. Whatever gives us the best chance to attack those expectations, we’re going to do it.”

That’s basically code for: “We love you guys, but if trading you is in the best interest for the franchise, we’ll do it in a heartbeat.”

Spoelstra continued to comment on his relationship with both guys over the years:

“We know what they can do, versus the unknown, and we also care about them. I care about Rio. I’ve coached Rio for eight years. You develop a relationship with him. I care about Chris. We were all instrumental in bringing him here, and that was for a reason. They understand. They’re pros. They know we care about them and they know it’s a business.”

Both Andersen and Chalmers have one year left on their contracts. Andersen has a cap hit of $5 million this season, while Chalmers’ is at $4.3 million. Trading both players would go a long way towards falling below the luxury tax line for the Heat.

The luxury tax is not computed until season’s end, so if both players are traded by the trade deadline, both players’ salaries would not count towards that tax.

However, if the Heat do emerge as contenders, and both veterans are key pieces of the rotation, it will be hard to envision Pat Riley trading Andersen and Chalmers for virtually nothing.

We’ll see how this situation plays out as the season develops.
[xyz-ihs snippet=”Responsive-Ad”]