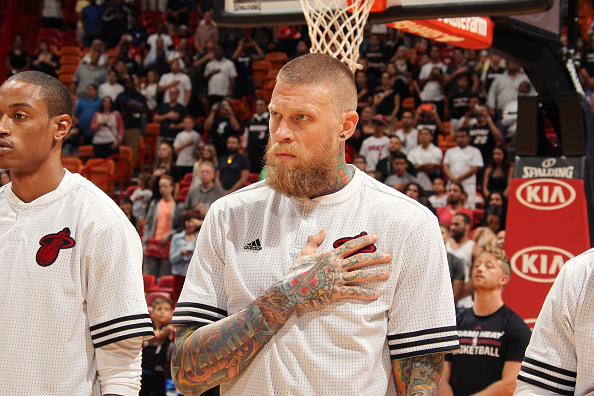 While the Miami Heat are always surrounded by a plethora of storylines, one of the most puzzling ones is the situation revolving their big men.

Through the first 33 games of the season, Amar’e Stoudemire and Chris Andersen have seen minimal playing time. Despite both players having something to offer even in the twilight of their careers, head coach Erik Spoelstra has barely utilized either player in 2015-16.

“Just based on things that happened with the team, right now seemed like the right time with J-Mac out to get a little bit of a scoring threat on the second unit.”

Spoelstra continued to stress that the Heat remain focused on keeping Stoudemire fresh for the season:

“To manage the season as much as possible to keep him fresh, keep him moving in the right direction.”

As far as Andersen is concerned, “Birdman” has appeared in just five games so far. Spoelstra explained his rationale for stashing Andersen on the bench:

“Just try to find as much stability as possible. He’s been great with it…Our season will dictate the rest of it, but I don’t want to change it game to game. This is for stability.”

If the Heat continue to deal with various injuries as they have through the first two months of the season, the team may be forced to give up stability for the sake of having guys on the court. With McRoberts and Winslow still dealing with injuries, Heat Nation may see more of Stoudemire and Andersen in the near future.
[xyz-ihs snippet=”Responsive-Ad”]