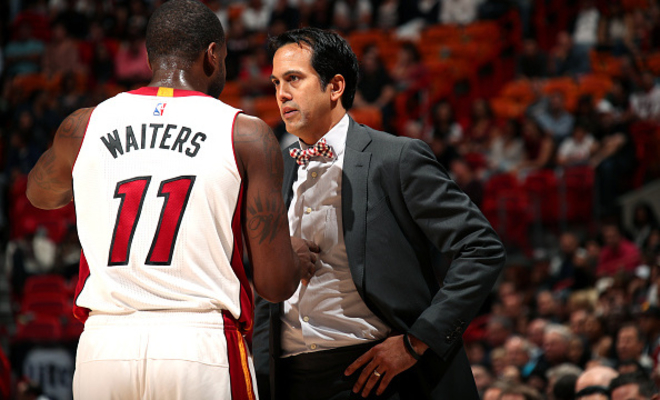 The Miami Heat dropped a tight contest to the Boston Celtics, 96-90, en route to their second straight loss and third loss on the season on Saturday night.

Although Heat head coach Erik Spoelstra rolled out a starting lineup of Goran Dragic, Dion Waiters, Josh Richardson, James Johnson, and Bam Adebayo to start the game, a completely different unit finished the game. Late in the fourth quarter, as the Heat mounted an epic rally, the lineup on the floor consisted of Tyler Johnson, Dragic, Justise Winslow, Kelly Olynyk, and James Johnson.

After the game, Spoelstra was asked what made him go with that finishing unit.

“Last night, that group wasn’t going,” Spoelstra said of his first unit. “It’s not an indictment on anything. It was clear, at the beginning of the first and third [quarters], that group was flat. We found a group that got us back into the game, made a couple of different subs. We went with that group down the stretch and we weren’t able to get it done. That’s why you have 15 guys on the roster. Different nights call for different things.”

Waiters sat the entire fourth quarter, and it turns out, the Heat have been outscored by 21 points this season when their starting shooting guard has been on the floor. With him on the bench, the team is plus-6.

Spoelstra isn’t putting the blame entirely on Waiters and says “Dion is fully in the mix [to still close games].”

“You could see in some games it looks like he has the step and in some games he doesn’t,” Spoelstra said. “But his treatment is going really well. He’s getting better. He’s getting healthier. The pain and all that is clearing up. So he just has to stick with the process.”

The shooting guard could have had surgery on his bothersome ankle over the summer, however, the recovery period would have been eight to 10 months.

Instead, he chose to go through the route of rest and rehabilitation and continue playing. As a result, Waiters has been missing practices to rest and goes through significant pre-game and in-game treatment to keep the ankle from tightening up on him.

“I don’t feel sorry for that man. He’s a dog,” James Johnson said of Waiters pushing through his injury. “He knows that we need him. So for him to sacrifice like that is just part of the game, part of the character, part of building something bigger than you.”