Erik Spoelstra Criticizes State of Coaching, Feels Grateful to Be with Heat 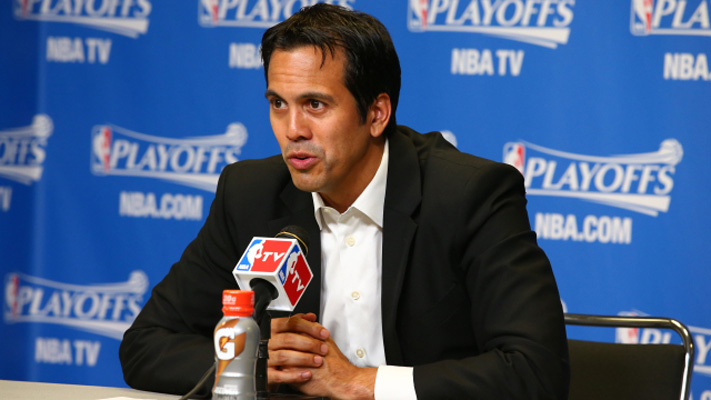 After Frank Vogel was fired by the Indiana Pacers on Thursday, Miami Heat head coach Erik Spoelstra didn’t sound too happy about the move.

For a span of three years, the Heat and Pacers were involved in the Eastern Conference’s biggest rivalry. From 2012 until 2014, both teams met in the playoffs each year. Although the Heat prevailed in each of those series, it didn’t come easy—neither of those series went less than six games.

Needless to say, Spoelstra is pretty familiar with Vogel’s skills as a head coach. Following Thursday’s shootaround in preparation for Miami’s game versus the Toronto Raptors, Spoelstra commented on the Pacers’ decision to move on from Vogel:

“That’s very disturbing actually. I’ve only been the head coach for eight years. What am I, the second-longest tenured? That’s a sad state of where the coaching profession is right now, and instability of organizations.”

The 46-year-old head coach is correct—he is the second-longest tenured coach in the NBA after the San Antonio Spurs’ Gregg Popovich. Spoelstra became head coach of the Heat prior to the 2008-09 season.

The two-time NBA champion head coach cited how grateful he is to have worked for such a loyal organization over the past 21 years:

“That’s why it’s fairly easy for me to feel grateful. I’ve been a part of this organization for 21 years. Same group. When we say it’s a family, we are. We’ve been through everything. We’ve been through 15-win seasons together. We’ve put together teams, rebuilt teams. We know how each other will respond in the trenches when it’s tough. But you have to be able to also have opportunities to grow with a team and go through the tough times. You don’t get an opportunity when you’re making changes all the time. I probably would have been fired two or three times in a different organization.”

Part of the reason the Heat have been the most successful franchise in the Eastern Conference over the past decade has been the stability within the organization. President Pat Riley has been with the team since 1995, the same year Spoelstra was hired. Since that time, Miami has advanced to five NBA Finals and won three of them.

While other teams continue to hire new coaches on an almost annual basis, the Heat remain the same as they’ve ever been. Although Miami may not win a championship every year, Heat Nation should definitely be thankful that they have the type of continuity that organizations can only dream of.
[xyz-ihs snippet=”Responsive-Ad”]