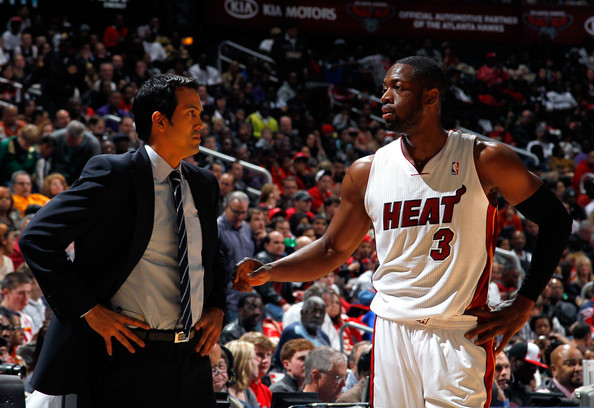 Miami Heat head coach Erik Spoelstra has vowed to do everything in his power to make sure Dwyane Wade’s final season goes as smoothly as possible.

Speaking with reporters at a season-opening news conference Monday, Spoelstra said that the 12-time All-Star deserves to end his career on his terms.

“I am not going to call it a farewell tour, because he doesn’t want it to be about that. Most pro athletes, unfortunately, do get to know when the end is,” he said. “Or they’re the last ones to know. He has this incredible blessing to have that perspective and know where the finish line will be and have the perspective to make every day matter. It’s the right player, right organization, right timing for all of this.

“I want him to know I am going to give it everything I have to make sure it goes the way he wants it to and in turn for him to give everything he has to make sure this team goes the way we want it to. His intuitive leadership has grown so much over the years…. He has more to give to this game.”

Spoelstra stopped short of discussing what the 36-year-old’s role would be on the court.

“We discussed it a little bit. But there are so many bigger things,” he said. “We’ve always been able to figure out the basketball stuff. It’s the bigger things we want to be aligned on.”

The coach added he is not looking forward to bidding forward Udonis Haslem a similar goodbye. The team re-signed the 38-year-old earlier this month after he averaged just 5.1 minutes per game in 14 appearances last year.

“He does it so selflessly every year. He doesn’t have anything else to prove,” Spoelstra said of Haslem. “He can still produce, particularly in short bursts. Every team is looking for players like UD who can bring that leadership. That’s not his only role. He’s still a player. He’s Heat culture, he’s Heat life. Who else do you want showing that, being an example to those guys?”