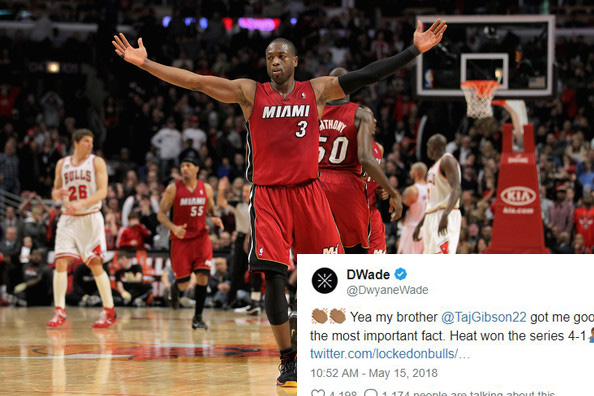 A Chicago Bulls Twitter fan account probably didn’t plan on getting roasted by Dwyane Wade on Tuesday morning, but that’s exactly what happened.

This Week in #Bulls History:

On 5/15/11, @TajGibson22 posterizes @DwyaneWade and then caps a 103-82 win over the Heat in Game 1 of the ECF with an INSANE putback dunk. Cue insanity at the Madhouse on Madison. #BullsNation pic.twitter.com/RB0o43Y2Rq

It wasn’t long before Wade caught wind of the post and promptly reminded all 8 million of his followers what really mattered when it came to that series.

???? Yea my brother @TajGibson22 got me good. But you left out the most important fact. Heat won the series 4-1??‍♂️ https://t.co/A1eNXOUIGN

The Miami Heat were sadly not able to replicate their success in the NBA Finals that season when they fell to the Dallas Mavericks in six games. Luckily, the Heat were able to make up for it by winning the next two NBA championships.

While Wade recently revealed that he planned to weigh his options regarding a possible retirement this offseason, it seems clear by this correspondence that his heart still burns with the competitive fire that he is known for. Hopefully, that means fans will be seeing Wade on the court once again next season.
[xyz-ihs snippet=”HN-300×250-TextnImage”]

dwyane wadeFeaturedmiami heatNews Ticker
← Previous Story Miami Heat News: Chris Bosh Being Sued by His Mother Freida Bosh
Next Story → What Dwyane Wade Plans to Do With Epic Photo of Him and LeBron James