Don't Miss
Home / Media / Dwyane Wade Explains Why He Was ‘Very Angry’ No Foul Was Called on Last Shot vs. Pistons

Dwyane Wade Explains Why He Was ‘Very Angry’ No Foul Was Called on Last Shot vs. Pistons 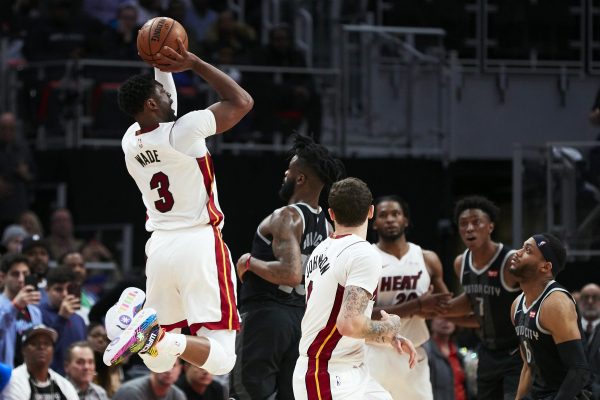 The closing moments of the Miami Heat’s 98-93 road loss to the Detroit Pistons on Friday night saw guard Dwyane Wade in a position to tie the game with 6.3 seconds left.

Wade missed that 3-point attempt, but indicated in postgame comments that Detroit should have been whistled for a foul on the play.

The Heat had charged back from a 16-point third-quarter deficit and got within a point with 19.8 seconds remaining. After the Pistons converted a pair of free throws with 11 seconds to go, Wade’s long-range attempt came up short, with two more free throws by the hosts putting the game away.

The retiring veteran spoke about the absence of any official’s call on his shot:

“It’s tough, trying to get a good look. Thought we had a great pass to Tyler [Johnson]. He dribbled through and [we’re] trying to get to an open spot. I feel I didn’t get a clean land on my shot. That’s all you ask for to go up and come down. I felt like I didn’t get a good one, so I was very angry with that. Besides that, I thought we got as good a look as we can on that possession.”

Wade came off the bench to finish with 20 points, eight assists and four rebounds, scoring eight of those points in the fourth quarter. That miss was one of only four on the night for him, finishing 10-of-14 from the field.

Heat head coach Erik Spoelstra also felt that Wade had been fouled on the play:

“It looked like he got clipped. He was moving one direction very fast and it looked like [Reggie] Bullock was underneath him. You have to let a shooter land. I didn’t see a replay on that but from my vantage point that looked like a play that could have sent him to the line. We left it to chance by making it a need three situation right there instead of a need two.”

In reality, the Heat lost the game at the foul line, offering a miserable 5-for-19 effort in that area for the night. The most glaring number belonged to center Hassan Whiteside, who missed all eight of his attempts.

The Heat, which has dropped the first two games of its four-game road trip, is back in action on Saturday night with a game in Chicago against the Bulls.
[xyz-ihs snippet=”HN-300×250-TextnImage”]