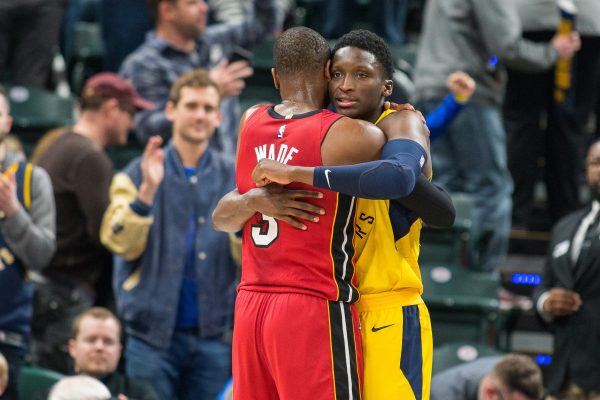 Indiana Pacers star shooting guard went down with a gruesome injury on Wednesday night, and it didn’t take long for Miami Heat legend Dwyane Wade to take to social media to show his support.

Prayers going all the way up fast for my lil bro @VicOladipo I’m here to help you get thru the tough times bro.

Oladipo is considered to be one of the best young shooting guards playing right now, and since he was a rising star at Indiana University, he has looked up to Wade as a role model on and off the court.

“When it’s all said and done, he’s going to be one of the greatest to ever play. He already is to me,” Oladipo said of Wade to the IndyStar back in 2014. “It’s great to have him as a mentor and a close friend.”

Now, Oladipo will be able to look to Wade for guidance in a new way. During his storied career, Wade has battled with injuries to his shoulder, ankle, knee, and more. He has continuously bounced back and remained strong. Now, Oladipo will have to do the same.

According to reports, Oladipo ruptured a quad tendon in his right knee and will miss the remainder of the 2018-19 season.

Breaking: Victor Oladipo has a ruptured quad tendon in his right knee and is out for the season, the Pacers announced. pic.twitter.com/juug8cMkwG

Wade spoke of the injury following Miami’s loss to the Los Angeles Clippers on Wednesday night.

“You obviously never want to see any players get injured, especially ones that you have relationships with,” he said. “Guys put the work in. These guys are so mentally strong that eventually, if it is anything that sets them back for a little while, he’ll work his way back to where he is or even better. I pray that it’s nothing serious, but if it is, I know that he’ll do everything, and we’ve got the same trainers I know they’ll to everything to make sure that he’s Victor Oladipo again.”

Wade’s words are about as supportive as can be. Hopefully, his praise and support helps Oladipo as he begins his rehabilitation process.
[xyz-ihs snippet=”HN-300×250-TextnImage”]