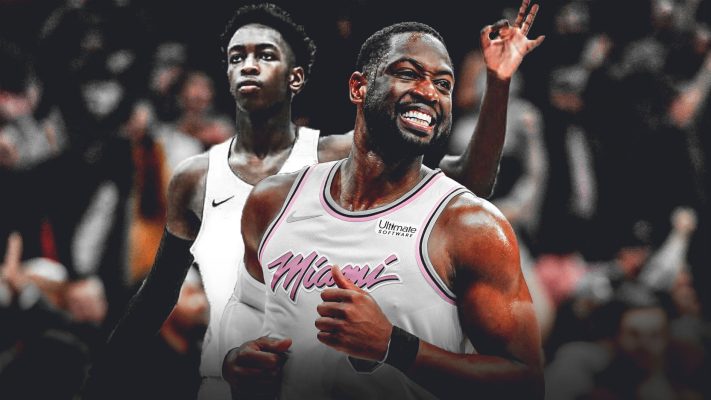 The thrill of being an NBA superstar is something that Miami Heat guard Dwyane Wade has dealt with throughout his 16-year career, but that thrill has come at a price.

In his final season in the league, Wade’s responsibilities on the court have forced him to miss high school basketball games involving his son, Zaire.

Wade spoke about the challenges of trying to watch his son in the midst of his farewell tour. The three-time NBA champion indicated that he’s taking advantage of technology to stay on top of his son’s season as a junior at Plantation American Heritage High School:

“It’s definitely tough, like for all parents being away from their kids. You want to enjoy the sports part of it. For me, I’m able to watch their games because of an app that I use, which keeps me at least involved. But obviously, you want to be there. So I just try to make sure that I post about my kids and let them know how proud of them I am, especially my oldest son to let him know that his time is coming and all these kinds of things.”

Amid Wade’s hectic schedule, he’s been able to see just four of his son’s games in person. He admitted that his retirement is strongly connected to the fact that his son still has another year to play before competing at the collegiate level:

“It was a big part of it, of course. I think if he was a senior this year, it would have been way different. I know I got another year with him. Of course, we have this amazing job that has allowed our family to have everything that they have. But at some point, you don’t want to miss everything. As you get older in the sport and your kids get older, you would like to be around more. I’ve been able to go to more games this year than I have in the past and the sky is the limit from here.”

Zaire Wade averaged 9.1 points, 6.1. assists and 4.6 rebounds while playing in Elite Youth Basketball League last summer. Thus far, only the University of Nebraska has offered him a scholarship, though the University of Miami is reportedly looking at him as a potential recruit.

One indication that his son is continuing to develop his game came in their annual 1-on-1 matchup. Dwyane Wade has yet to lose, but last year’s contest was quite close:

“I beat him. But I started to see he was a little quicker than I remember. From there, I was like, ‘We’ll see next year.’”

The Heat legend may be uncertain about that matchup, but he remains intent on leading his team to the postseason in his final year. The Heat currently hold a 23-24 record as they prepare for Sunday night’s road game against the New York Knicks.
[xyz-ihs snippet=”HN-300×250-TextnImage”]