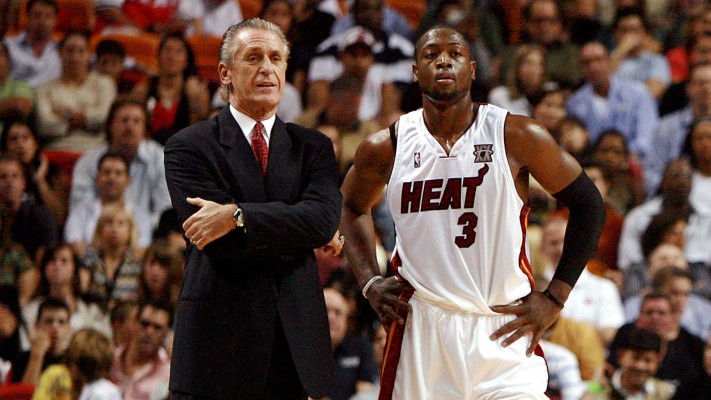 Despite the fact that Dwyane Wade retired last month as a Miami Heat legend, his interest in the fortunes of the team haven’t waned.

That’s apparent from an interview with Heat team president Pat Riley that’s part of a local television special that will be broadcast on Friday on WPLG.

We begin to preview our Dwyane Wade "Bigger than Basketball" tribute show that airs next Friday night at 8pm. We'll air clips daily, starting tonight on @Local10Sports Sunday at 11:35pm. Here's what Pat Riley told me about a recent text from Wade and his future role. pic.twitter.com/HMYVdIDKpZ

“He just texted me the other day. He just texted me a name of a guy to look at in the draft,” Riley said. “He just texted me the name and I’m aware of who the player was and I said, ‘You’re not the general manager or president yet okay, but I appreciate it and we’ll take a good, hard look at him,’ and I think that’s the kind of thing that Dwyane’s going to add to the organization.

“To be quite frank with you, I don’t know exactly where he’s gonna go, as an ambassador or whatever kind of position he wants here would be great, but I think he’s got other things on his mind. But there’s a deep love from all of us here with Dwyane and I think it’s reciprocal, so it’s wonderful.”

Exactly who that player is remains a mystery, though Wade’s years of experience in the NBA provides him with a unique perspective when it comes to gauging a player’s talent.

Wade has yet to indicate exactly what type of job he’s seeking now that his playing days are behind him, though a team ambassador role, as Riley mentioned, would be the easiest to fulfill.

In that scenario, he could simply be himself with a fan base that already adores him.

Given his life off the court, as well as the acting career of his wife Gabrielle Union, he may not have time for a full-time role with the team. However, it’s clear that the people currently in charge welcome his input and hope that it continues in the future.
[xyz-ihs snippet=”HN-300×250-TextnImage”]