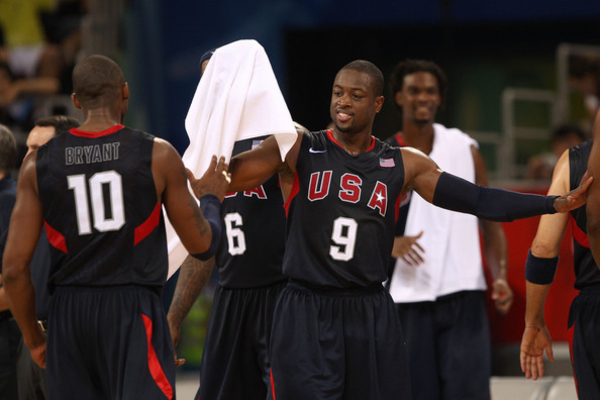 Dwyane Wade threw a number of lob passes throughout his professional basketball career, but a certain alley-oop to Kobe Bryant could very well be his best ever, according to the three-time NBA champion.

The former Miami Heat star recently suggested to his followers on Twitter that perhaps his best ever lob pass may have occurred 11 years ago on Aug. 14, 2008. He and Bryant were playing for Team USA at the time the play occurred.

On the play, Wade stole the ball from an opponent as it nearly went out of bounds. Fortunately, the 6-foot-4 guard was able to recover the basketball quickly enough to deliver a perfect pass to a streaking Bryant who went up for a two-handed jam.

The alertness that Wade displayed in that sequence was just a glimpse of what made him one of the best shooting guards to play in the NBA. He led his USA Basketball teammates in scoring with 16.4 points per game and averaged 4.0 rebounds, 1.9 assists and 2.3 steals in addition.

That team went 8-0 in the Olympics en route to winning the gold medal in basketball.

LeBron James, Wade’s good friend who was also on that USA team, was the beneficiary of some of the Heat legend’s best alley-oops when they played together in Miami for four years. Others might argue that one of those passes could be Wade’s best lob pass of all time.

Nonetheless, that assist to Bryant is certainly one of the strongest candidates for the top spot.