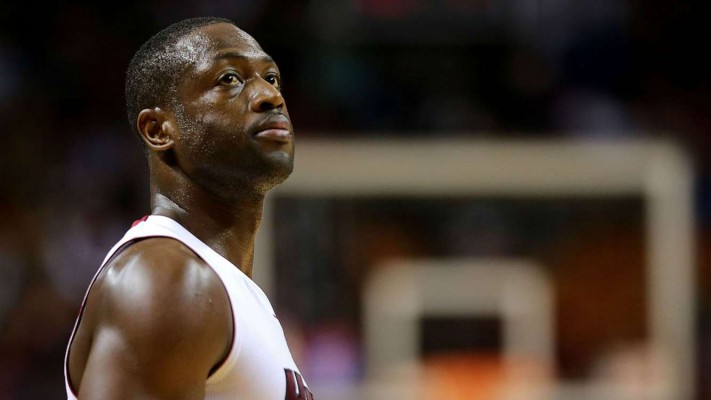 Dwyane Wade is in the midst of his 13th year in the NBA.

Despite being 33 years of age and having suffered a number of injuries during his 13 years of service in the NBA, the Miami Heat shooting guard is still playing at a high level. Wade is currently leading the Heat in scoring, having averaged 18.4 points entering Wednesday’s game versus the Detroit Pistons.

While Wade is many years away from even coming close to playing 20 years in the NBA, that did not stop Michael Lee of Yahoo! Sports from asking the veteran if he’d consider playing two decades of professional basketball. Here is what Wade had to say on the matter:

The topic of conversation came up due to the discussion of players such as Kobe Bryant, Kevin Garnett, Tim Duncan and Dirk Nowitzki. Both Bryant and Garnett are two of five players in NBA history to have played at least 20 seasons in the league. Duncan has played 19 years, while Nowitzki is not far behind with 18 seasons of service.

The most comparable to Wade of the aforementioned four is none other than Bryant. Both Bryant and Wade play the same position and are the most accomplished shooting guards of their generation. While there is little doubt in regards to Bryant’s legacy, he is struggling tremendously this season—the Los Angeles Lakers great is converting on just 33.1 percent of his shots and 19.5 percent from beyond the arc. Making matters even worse is that the Lakers are one of the bottom two teams in the league with a record of just 2-12.

It’s clear that Wade plays in an entirely different manner than he did just five or six years ago. The Heat guard acknowledged he changed his style of play once LeBron James and Chris Bosh initially joined the franchise in 2010 when Wade was at the age of 28. He states the following in the article:

Nobody, not even Wade himself, knows exactly how long he will play. The 33-year-old is currently healthy and has yet to miss any games this season due to injury.

Having said that, Heat Nation definitely hopes that the veteran guard remains injury-free for the rest of his career and remains productive as he enters his last few years in the NBA.
[xyz-ihs snippet=”Responsive-Ad”]