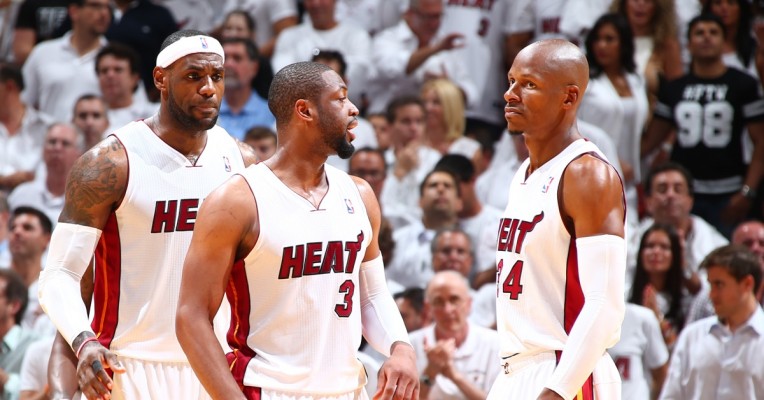 At the Final Four in San Antonio on Saturday, the newest members of the Naismith Memorial Basketball Hall of Fame were announced, with former Miami Heat star Ray Allen among those selected into the shrine. Using Allen’s most iconic moment as a member of the Heat as the centerpiece of a tweet, former teammate Dwyane Wade sent along his congratulations.

Game 6!!! Enough said!!! Congrts to my brother Ray Allen for being inducted into the Naismith Hall of Fame!!! & THANK you for saving our Championship season. #Yousabadboy pic.twitter.com/2iA6HKHr16

Allen’s clutch 3-pointer in the closing seconds of regulation in Game 6 of the 2013 NBA Finals sent the game against the San Antonio Spurs into overtime, with the Heat eventually winning the game. Two nights later, Miami completed the comeback from its 3-2 deficit in the series and captured its second consecutive championship.

That lasting image has continued to be ingrained in the minds of all Heat players since it’s on the wall just prior to entry into the team locker room at American Airlines Arena. Allen had previously won a title with the 2008 Boston Celtics, while Wade had previously been part of the Heat’s 2006 and 2012 championships.

Allen will be officially inducted into the Hall of Fame during September ceremonies in Springfield, Mass.
[xyz-ihs snippet=”HN-300×250-TextnImage”]