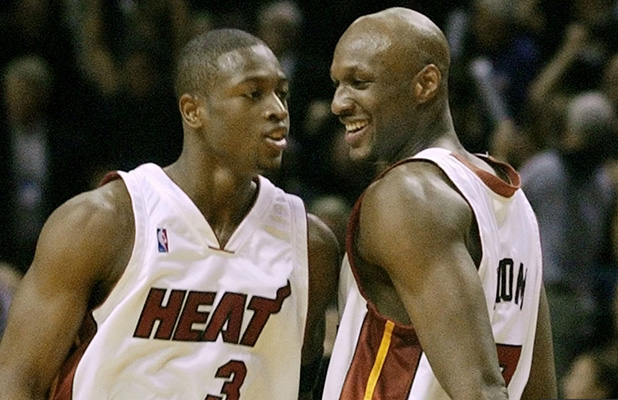 The downward spiral of former Miami Heat forward Lamar Odom took another tragic turn on Tuesday with news of Odom being found unconscious in a Crystal, Nevada brothel.

Odom was first rushed to a hospital in nearby Pahrump after being found unresponsive at 3:30 p.m. local time (6:30 ET), before then being taken to Las Vegas’ Sunrise Hospital by ambulance. Odom’s 6-10″ frame prevented him from being transported via helicopter.

Odom, who turns 35 next month, played for the Heat during the 2003-04 season, starting 80 regular season games after signing with the team as a free agent on August 26, 2003. In those games, he averaged nearly a double-double in each contest, with 17.1 points and 9.7 rebounds per game.

In his 13 postseason games that year, he posted numbers of 16.8 points and 8.3 rebounds per game for a Heat team that reached the Eastern Conference semifinals before losing in six games to the Indiana Pacers.

Odom was dealt to the Los Angeles Lakers in 2004 as part of a package to obtain Shaquille O’Neal. That contingent included Caron Butler, Brian Grant, a first-round draft selection in 2006 and a second rounder the following year.

Dwyane Wade was a rookie during Odom’s lone season in Miami, but tweeted his support for Odom after hearing the news:

I pray ths morning for my brother. Dear God he's one of the good ones. PLEASE watch over him and listen to his heart speak #PrayersForLamar

After helping the Lakers win a pair of NBA titles, Odom was traded to the Dallas Mavericks in 2011, where he spent one year before closing out his career with his original team, the Los Angeles Clippers during the 2012-13 campaign.

Since his career ended, Odom has gotten divorced and has been arrested from drunken driving.
[xyz-ihs snippet=”Responsive-Ad”]