Dwyane Wade Sends Amazing Message of Thanks to Derrick Rose 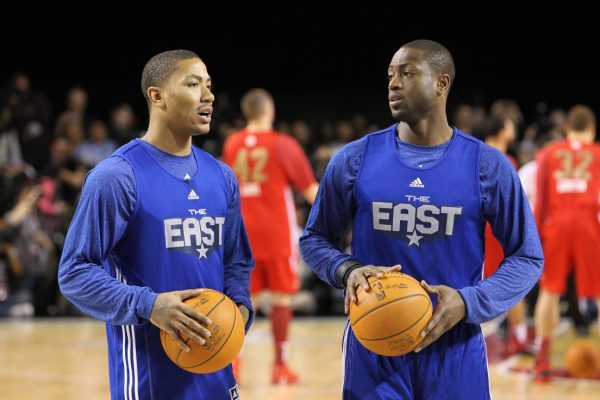 While it’s too early to tell what Miami Heat icon Dwyane Wade will be like in retirement, fans might have already gotten a sneak peak.

DRose thanks for sharing your story. You’re an inspiration to Millions but especially to the next generation in our home town Chicago! #Legend

One clip from the film that has already made the internet rounds shows the exact moment that Rose found out he had been traded by the Chicago Bulls back in 2016.

Watching Derrick Rose break down after being traded to New York has me in shambles. ? (via @Stadium) pic.twitter.com/81JlvvEdlh

Wade, 37, just concluded his prolific NBA career. The veteran went out on a tear, posting a triple-double of 25 points, 11 rebounds, and 10 assists in Brooklyn on Wednesday.

In addition to both being from Chicago, Rose and Wade played together for a stretch with the Cleveland Cavaliers during the 2017-18 regular season. While Rose had a terrible year with the Cavs, the often-injured guard experienced a revitalization with the Timberwolves this season. The former All-Star put up 18.0 points, 4.3 assists and 2.7 rebounds per game this season.

While the 30-year-old hasn’t returned to his 2011 MVP form, he certainly had a positive year. With inspiration and motivation from guys like Wade, the 6-foot-3 point guard will likely be further motivated to continue his own storied NBA career.
[xyz-ihs snippet=”HN-300×250-TextnImage”]