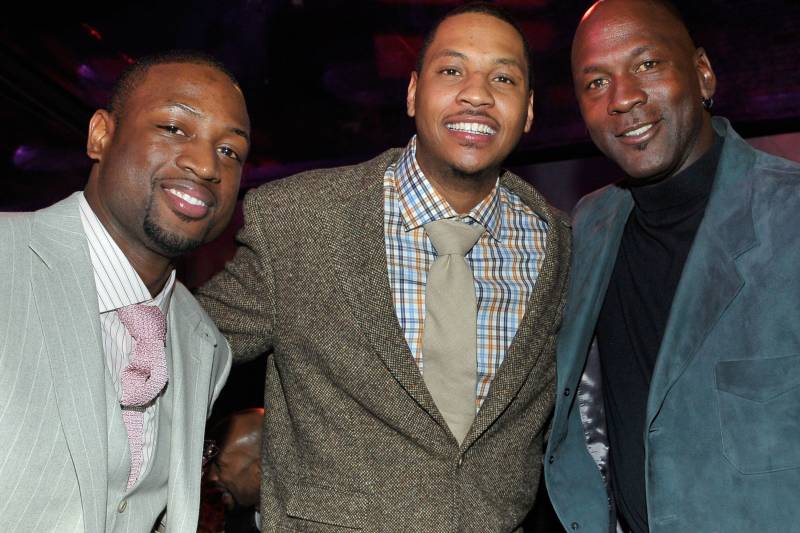 Dwyane Wade joined a draft party after he was drafted by the Miami Heat in 2003, but the retired Heat superstar now says that Chicago Bulls legend Michael Jordan refused to pay to enter the party.

Wade was one of many individuals who was interviewed as part of the “The Last Dance” documentary, focusing on Jordan’s last season with the Bulls.

Those interviewed were asked what it was like to meet Jordan, with Wade offering his anecdote.

“I just got drafted to the Heat, and then going back to Chicago after that, they had a big draft party,” Wade said. “And I’m inside the draft party, and it was poppin’. I remember my cousin came and got me, and he was like, ‘Yo, Jordan’s here. They won’t let him in.’ I’m like, ‘What, man? Stop playing with me.’ And he was like, ‘Bro, I’m serious. Michael Jordan is outside with like 50 people. They won’t let him in.'”

Incredulous, Wade quickly tried to rectify the problem and also smooth things over with Jordan. The Bulls legend didn’t appear to be too upset and paid tribute to Wade’s entry into the NBA.

“So we run out the door, run up front where they won’t let him in,” Wade said. “‘Why y’all won’t let Jordan in?’ Somebody was like, ‘He wouldn’t pay.’ I’m like, ‘What?’ So I run outside and Michael Jordan is out there on a motorcycle, surrounded by like 30 dudes. I run up to him. I’m in awe, of course, a young kid. And he said, ‘I just wanted to come by and show you some love.’ I think he said something about them trippin’ at the front, or something like that. But he’s like, ‘I just wanted to come by and show you some love. Congratulations on getting drafted.’ And I was just like, ‘Man, thank you for coming.’ I couldn’t believe it. ‘Thank you for coming. You want to come in?’ And he’s like, ‘Nah, nah, we good. I just came by to show you some love.’ And he rode off on his motorcycle.”

At the time of that meeting, Jordan had recently retired for the third and final time. That meant that Wade, who grew up in Chicago watching Jordan’s iconic career unfold wouldn’t have the opportunity to play against him.

However, Wade carried on Jordan’s tradition of hard-nosed basketball and concluded his 16-year career by leading three Heat teams to the NBA title.

Like Jordan, who is already a member of the basketball Hall of Fame, Wade will also join that select group when he becomes eligible for the honor.

The documentary’s title is also something that ties Wade and Jordan together, since Wade concluded his NBA career with his own “One Last Dance” swan song. That season-long tribute saw Wade receive accolades from opposing teams and fans.

The 10-part documentary on Jordan will begin on ESPN on Sunday night beginning at 9 p.m. EST.