Dwyane Wade Says He Would ‘Love’ to Retire on Miami Heat 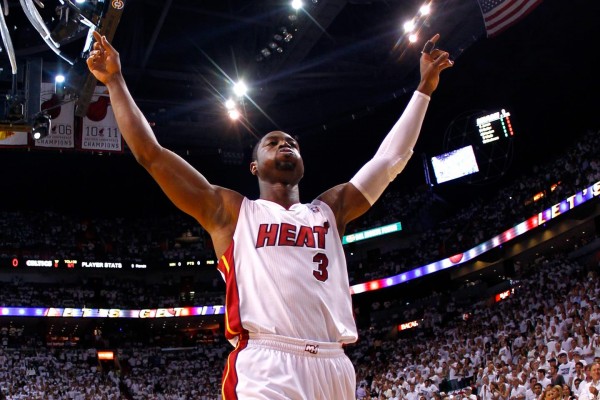 Every time Dwyane Wade takes the court, he gets closer to the end of his Hall of Fame career. While he is currently working to try to help the Cleveland Cavaliers get themselves out of a month-long slump, he also seems to be looking towards the future.

According to Barry Jackson of the Miami Herald, Wade is giving some thought into how he would like to end his career when the time comes. Based on his answers, it seems he wants to call it quits as a member of the Miami Heat one way or another.

“I have thought about it of course,” Wade said. “I wouldn’t lie and say I haven’t. When that opportunity comes, that day comes, hopefully, I can go out in a Miami Heat jersey. I don’t know how it will be but I would love it.”

Wade, who is set to become a free agent this offseason, could sign with Miami this summer and continue playing for the team that drafted him. He could also go the route of fellow NBA icon Paul Pierce, who signed a ceremonial one-day contract with the Boston Celtics this past summer before hanging up his jersey for good.

“I don’t know,” Wade said in Cleveland prior to Wednesday’s game against his former team. “For me, I’m at the point where you get this high up in years played in the NBA, you kind of take the summer to think about what you want as a player and go from there. For me, the arena that I walked in to play, I would like to leave in. How it’s done, I don’t know. I can’t predict the future. If it’s a Paul Pierce situation or just playing, I don’t know. But I definitely would like to walk out the same way I came in.”

Wade has certainly slowed down since his heydays in Miami and is seeing the court just 23.3 minutes per game, over ten minutes less than his career average. He has still managed to find production with the Cavs, however, and is currently averaging 11.2 points, 4.0 rebounds, and 3.7 assists per game.

What Wade has definitely not lost with time is his veteran presence. His championship pedigree would certainly be useful for a Heat team that continues to prove that they are ready to compete for a playoff spot and more. It seems Wade has noticed that change and has been impressed with what he has seen from the Heat as of late.

“Just like every team, there are games there are people feel they should win that they lost, and games people feel they should win and won. This team plays hard,” he said. “They’re consistent with their game for the most part. That’s going to get them a lot of wins. I’m impressed with the guys, J-Rich [Josh Richardson] and taking that step to the next level. Tyler [Johnson], playing amazing. I’m happy for those guys. But I expect it. I expect those guys to play the way they are.”

Only time will tell if the Heat have impressed Wade enough to convince him to sign with them this offseason. In the end, regardless of where and how he decides to end his career, Wade will always be a Miami icon and a member of the Heat family.
[xyz-ihs snippet=”HN-300×250-TextnImage”]