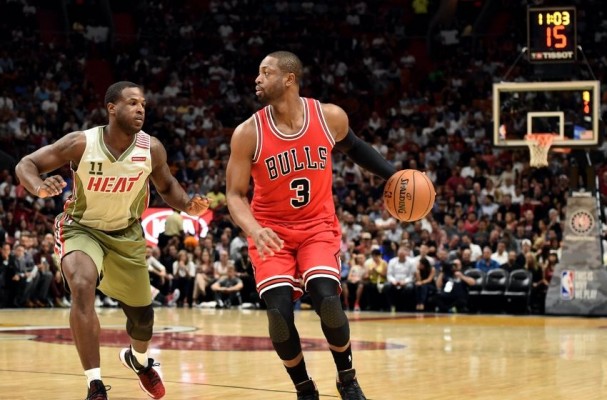 The Miami Heat are on a league-leading 11-game winning streak and people are starting to notice.

In particular, former Heat superstar Dwyane Wade intimated to reporters after the Chicago Bulls’ 112-107 win on Monday, a game in which he dropped 31 points on 12-18 shooting, that although his team has been playing better of late, it’s nothing compared to what his former team has been doing for the past few weeks.

Over the past couple weeks, Wade’s Bulls have struggled to deal with locker-room drama and trade rumors, limping to a 5-5 record in their past ten games. While the Bulls are clinging to the seventh seed in the East, the Heat are charging up the standings to make run for a playoff spot. Miami is currently sitting two games behind Detroit for the eight seed.

The Heat will take on the Milwaukee Bucks on Wednesday night as they try to extend their winning streak to 12 games and push further into the playoff race.
[xyz-ihs snippet=”Responsive-ImagenText”]