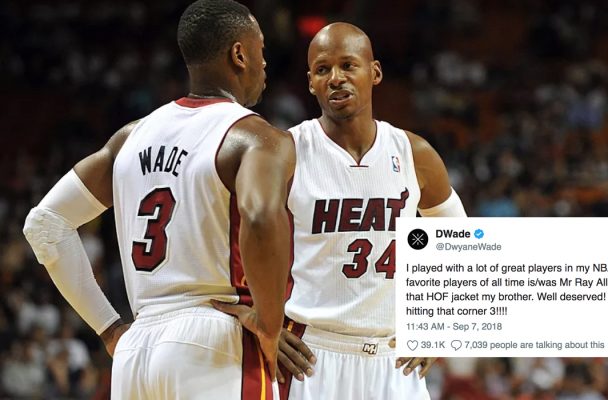 The induction of Ray Allen and others into the Basketball Hall of Fame on Friday night didn’t go unnoticed by one of Allen’s many former teammates. Dwyane Wade, who played two seasons with Allen as a member of the Miami Heat, took time to salute the achievement of a player who hit the most iconic shot in franchise history.

I played with a lot of great players in my NBA career but one of my favorite players of all time is/was Mr Ray Allen. Congrts on getting that HOF jacket my brother. Well deserved! P.S thanks again for hitting that corner 3!!!!

That 3-pointer Wade referenced was Allen’s clutch long-range bomb that helped send Game 6 of the 2013 NBA Finals into overtime. Prior to that basket, Miami was on the verge of losing the series to the San Antonio Spurs, but Allen’s shot spurred the team to that win and the clinching victory two nights later.

The Heat were the last of four teams that Allen played for during a legendary 18-year career. He had previously helped the Boston Celtics win an NBA title in 2008 before then signing with Miami in 2012. During his two seasons in South Florida, the team reached the Finals in each season.

Wade has yet to publicly announce whether or not he plans on returning for his 16th NBA season, though recent reports indicate that he’ll again wear a Heat uniform. His Hall of Fame status has already been cemented, which likely means that Allen will happily return the acknowledgement when that time comes.
[xyz-ihs snippet=”HN-300×250-TextnImage”]