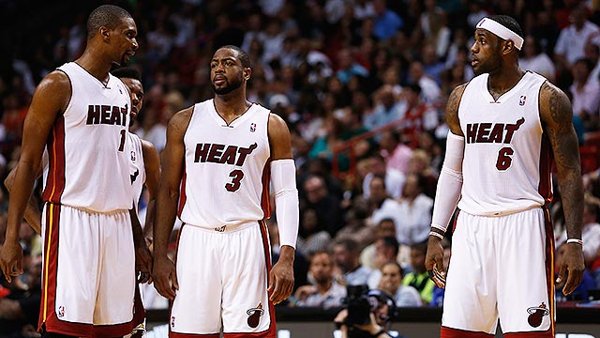 Miami Heat guard Dwyane Wade told Dan Woike of the Los Angeles Times that he considered retiring from the NBA during the Heat’s Big 3 era because of knee pain.

“My knees were in so much pain,” said Wade. “In my right knee, I had two sets of different bone bruises. I also had chondromalacia under the kneecap, which irritates the kneecap to the extent where it’s just more pain. In my left knee, I had three surgeries so I’m dealing with arthritis. I’m dealing with swelling and all the stuff that comes with that. It was a time where I didn’t want to do it anymore. I didn’t want to be in pain anymore.”

During that four-year time frame when the Heat had LeBron James, Chris Bosh, and Wade on the roster, Wade missed 64 regular season games. During the 2013-14 season, which was the last season of the Big 3 era, Wade missed a total of 28 games and averaged 19.0 points per game, which at the time was his lowest total since his rookie season.

James spoke about what Wade would say to him while dealing with the numerous painful injuries.

“It was frustrating for him. He couldn’t play back-to-back games or play consistently because every time he would play, his knees would swell up,” said James. “He’d talk about, ‘I don’t know, man. I don’t know if I can continue to do this. I don’t think I can do it.’ I couldn’t say anything other than, ‘Let’s get through this season. Make the most of it.’ “But he said, ‘I can’t be the player I want to be and help you the way I want to because I can’t even consistently be on the floor with you.’”

During those four years playing alongside James and Bosh, Wade averaged 22.2 points, 5.3 rebounds and 4.7 assists per game. The Heat made four straight NBA Finals appearances, winning two NBA championships along the way.

The 37-year-old announced before this season began that he would be retiring following the conclusion of the 2018-19 season, his 16th in the league. So far this season, Wade has proved that he could still be effective, averaging 14.3 points, 3.7 rebounds and 4.2 assists per game.

It would have been interesting to see how the Heat would have dealt with Wade’s retirement and whether or not it would have persuaded James to stay, rather than leave Miami and head back to the Cleveland Cavaliers in the summer of 2014.

Although it will be sad to see him leave at the end of this season, fans will surely be happy that he didn’t retire a couple of years ago and that they were able to watch him play a little more.
[xyz-ihs snippet=”HN-300×250-TextnImage”]