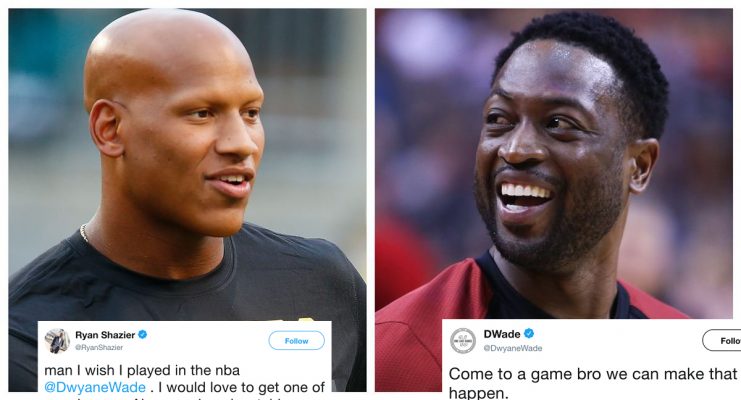 On Monday, Pittsburgh Steelers linebacker Ryan Shazier took to Twitter to ask Miami Heat guard Dwyane Wade if it was possible to get one of Wade’s jerseys even though he doesn’t play in the NBA.

Wade took note of the request and responded to the Florida native.

Come to a game bro we can make that happen. https://t.co/mnL8SvQ9j5

Shazier made sure to let the 36-year-old know that he would make it to a game.

Wade has been swapping jerseys with players from opposing teams after every game this season as part of his “One Last Dance” farewell tour.

Although he is a San Antonio Spurs fan, Shazier went to high school in Plantation, Fla., which is about 45 minutes away from American Airlines Arena, the Heat’s home stadium. Therefore, it’s possible that growing up, Shazier was able to watch Wade play as a member of the Heat.

Shazier is a two-time Pro Bowler, who has been with the Steelers for a total of five years after being selected by the team with the 15th pick in the 2014 NFL Draft. He didn’t play at all this past NFL season as he is still recovering from spinal stabilization surgery, which he underwent in December of 2017.

It’s amazing to see how athletes from different sports have taken time to appreciate Wade’s greatness and are desperate to get his jersey before he retires.
[xyz-ihs snippet=”HN-300×250-TextnImage”]