Dwyane Wade Claps Back at Bill Simmons After Questionable Tweet 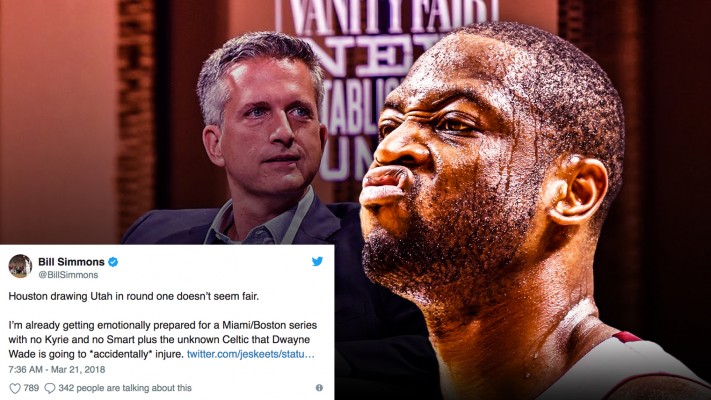 The NBA playoffs begin in less than a month, with the Miami Heat currently set to face the Boston Celtics in the first round. That scenario led Bill Simmons of The Ringer to take a cheap shot via Twitter at the Heat’s Dwyane Wade, which then resulted in the veteran guard delivering a brutal clapback in rebuttal and Simmons taking notice.

Houston drawing Utah in round one doesn’t seem fair.

I’m already getting emotionally prepared for a Miami/Boston series with no Kyrie and no Smart plus the unknown Celtic that Dwayne Wade is going to *accidentally* injure. https://t.co/MYPsM82RPI

Simmons, an avid Celtics fan, was noting the possible absences of the Celtics’ Kyrie Irving and Marcus Smart due to knee and thumb injuries, respectively. The game he was likely referencing was Game 3 of the 2011 Eastern Conference semifinals between the Heat and Celtics. In that particular contest, former Celtics guard Rajon Rondo suffered a dislocated elbow after becoming entangled with Wade. The Heat eventually won that series, though they came up short in the NBA Finals.

The fact that a Celtics fan such as Simmons was bitterly referencing a postseason injury that negatively impacted his team is likely to garner some attention in Cleveland. That’s because some fans of the Cavaliers still blame the Heat’s Kelly Olynyk, then playing for the Celtics, for becoming entangled with the Cavs’ Kevin Love during Game 4 of the Eastern Conference quarterfinals. Love missed the remainder of that postseason due to a dislocated shoulder, with the Cavaliers later losing in the NBA Finals.

Even if the two teams don’t face each other during the first round of the playoffs, the potential of a later matchup remains a possibility.
[xyz-ihs snippet=”HN-300×250-TextnImage”]