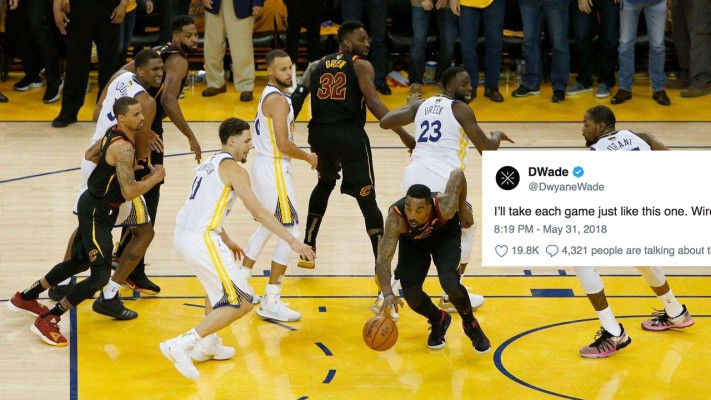 Game 1 of the NBA Finals on Thursday night had almost everything a fan could ask for. From incredible performances, to emotionally charged interactions, to meme-worthy moments, it was a thrill to watch from tipoff to the final whistle.

While many experts thought the Golden State Warriors would be able to overpower the Cleveland Cavaliers on their way to an easy win, the Warriors only managed to claim victory after a last-second blunder by the Cavs extended the game to an overtime period.

Following the game, Miami Heat guard Dwyane Wade took to Twitter to let his fans know that he hopes the entire series plays out just like Game 1.

I’ll take each game just like this one. Wire to wire.

Considering his past with the Cavs and his relationship with LeBron James, it’s quite likely Wade is rooting for Cleveland, but it seems that he is rooting for good basketball above all.

Unfortunately for Wade and every other NBA fan, they’ll have to wait until Sunday night to enjoy Game 2.

Hopefully the second matchup of the series is worth the wait.
[xyz-ihs snippet=”HN-300×250-TextnImage”]