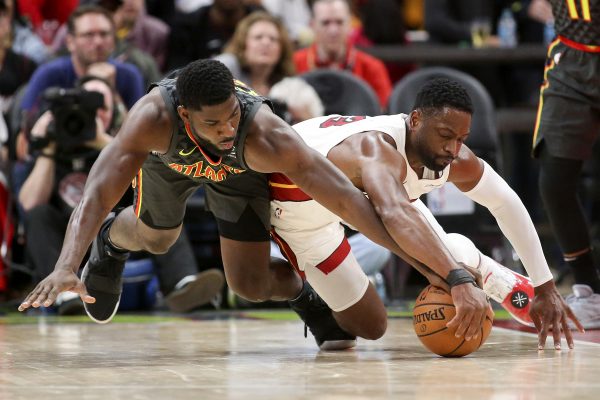 With 15 games under his belt during his final season, Miami Heat guard Dwyane Wade is not only putting up impressive offensive numbers for a 36-year-old – he’s also holding his own on the defensive end.

This guy @DwyaneWade is pretty good.

Old man is still getting it done on the defensive end, too. Dwyane's defensive assignments are shooting 9.3% worse than their season averages.

The stat helps tell a story that other defensive metrics hide. On paper, Wade’s -1.90 in Real Defensive Plus-Minus is not remarkable, sitting at 79th among current shooting guards. And his steals and blocks per game are below his career averages, even when you account for his reduced playing time.

But at the end of the day, what matters is whether your opponent can get around you or shoot over you. And in this regard, the Heat great is simply dominating.

In what some consider one of the most reliable metrics of defensive effectiveness, Wade is reducing his opponents’ field-goal percentage in shots at the rim. When his man attempts a shot within six feet of the basket, he makes it 8.9 percent less of the time than he does against other opponents. This puts Wade at seventh in the league among active guards.

In comparison, Milwaukee Bucks forward Giannis Antetokounmpo is reducing his opponents’ effectiveness within six feet of the basket by 8.6 percent.

And as he shuts down his opponents, Father Prime is also on a quest to pass Michael Jordan in career blocks.

While Wade is using his “One Last Dance” to make an important defensive contribution, he’s also putting up some impressive stats on the offensive end of the court. The 16-year veteran out of Marquette University is scoring 15.3 points a game and averaging 3.5 assists, while shooting 38.7 percent from deep. That last number is by far the best three-point shooting mark of his career, in which he has averaged 29.1 percent from beyond the arc.

Regardless of whether Wade can help the Heat make the playoffs, he is giving everyone a season to remember.
[xyz-ihs snippet=”HN-300×250-TextnImage”]