Dwyane Wade Indicates Which Player He Loves Watching in Playoffs 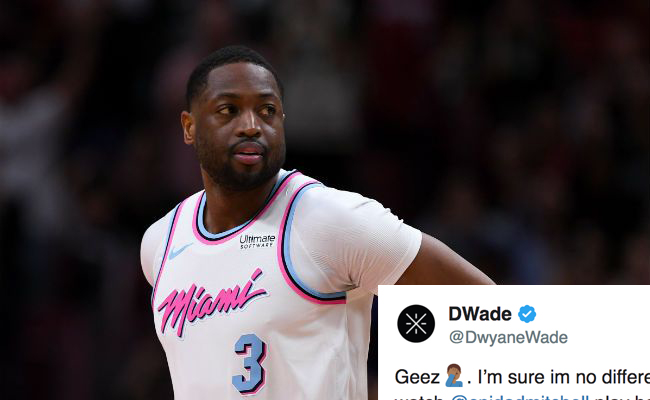 With the Miami Heat‘s season at an end, team legend Dwyane Wade is reduced to watching other teams compete for an NBA championship. While there’s undoubtedly frustration in not being able to challenge for what would have been his fourth title with the Heat, Wade is still watching playoff games closely and has become enamored with Utah Jazz rookie guard Donovan Mitchell.

Geez??‍♂️. I’m sure im no different than others when i say i love to watch @spidadmitchell play basketball!!! https://t.co/wwm0UD5V3Y

The 21-year-old Mitchell has dazzled in his first season and is a strong contender for the NBA Rookie of the Year award. He was actually drafted out of the University of Louisville by the Denver Nuggets as the 13th overall selection. On the same night he was picked, he was sent to the Jazz in exchange for a pair of power forwards, third-year man Trey Lyles and rookie Tyler Lydon. During the regular season, the 6-foot-3 Mitchell started 71 games for the Jazz and averaged 20.5 points, 3.7 assists, 3.7 rebounds and 1.5 steals per game, helping fill a huge hole that was created with the free agent departure of Gordon Hayward.

In the postseason, Mitchell has elevated his game and helped the Jazz pull a first-round upset over the Oklahoma City Thunder, with his 38 points in Game 6 helping deliver the kill shot in that series. Facing the Houston Rockets on their home court in the second round, Mitchell’s 17 points and 11 assists in Game 2 helped even that series in the Jazz’s 116-108 victory.

Wade no doubt sees in Mitchell some comparisons to the start of his own career during the 2003-04 campaign, when he averaged 16.2 points, 4.5 assists, 4.0 rebounds and 1.6 steals in 61 games, 56 of those in a starting capacity. In his third season, Wade led Miami to the franchise’s first NBA championship and was named Most Valuable Player of the 2006 NBA Finals.

The status of the 36-year-old Wade for next season remains uncertain, though he’s scheduled to meet soon with team president Pat Riley. While Wade could end up announcing his retirement, his indelible place in the team’s history was solidified long ago.
[xyz-ihs snippet=”HN-300×250-TextnImage”]