Dwyane Wade Opens Up About His Final Career Matchup vs. LeBron James on Monday 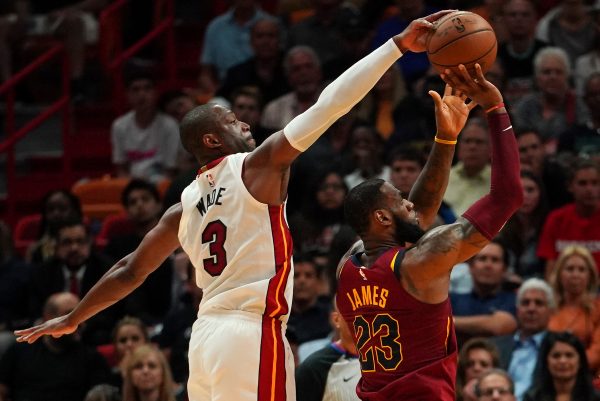 Dwyane Wade and the Miami Heat will face off against LeBron James and the Los Angeles Lakers on Monday night, and Wade is already reflecting on what will be his final career matchup against his close friend and former teammate.

“Out of all the players in the league besides [Udonis Haslem], Bron is one of my closest friends,” Wade said. “It definitely will mean a little bit more, and just everything in our careers. The paths that we both went down as competitors versus each other and as teammates, we’ll always be linked together forever.

“So, it will definitely mean a lot. It’s the ending of a chapter in both of our lives. This is just the end of a chapter as competitors on the basketball court.”

The chapter covering the two surefire future Hall of Famers has included them coming into the league as a part of one of the most talented draft classes of all time. It also includes their early matchups as two of the most promising young stars in the league and also their two championships won while teammates in Miami.

Now, as Wade is nearing the end of his career, it seems this final matchup will be one that both players will remember forever.

“I’ll savor this. We both will,” Wade said of Monday’s matchup against James. “We both had some amazing moments versus each other as competitors. But we obviously had some great moments as teammates. And we’re going to be friends forever, but this is the last time we play basketball versus each other. So we’ll enjoy it and then we’ll savor it.

“Obviously, LeBron is one of my good friends and the history we have as teammates, as well. It definitely means more than just the average last game versus a team or individual.”

James has also commented on the upcoming game, saying that the matchup is bittersweet for the four-time NBA MVP.

“It’s bitter and it’s sweet. It’s sweet and it’s sour,” James said. “The sweet part is that I’ve always loved being on the floor with my brother. We struck up a relationship together at the combine in 2003, and it started from there. And the sour part about it is that this is our last time sharing the same court. Sometimes it’s just chemistry. Sometimes you can’t even explain it.”

More than anything though, what this game really comes down to is deciding once and for all the career record between two players. At the moment, the Wade-versus-James series holds a 15-15 record. Given the stakes, there’s sure to be quite a bit of trash talk.

“We always have a little chatter because I enjoy playing those games. I’m woke when I play,” Wade said. “I love the little chatter back and forth, but not trash talking. Just basic chatter, especially since it will be our last time.

“So we’ll definitely have a moment where we look at each other like this is it. It’s crazy that it happened so fast. We remember the night we got drafted, it’s like yesterday for both of us. It comes fast.”

Given how much both players are putting into this game, it surely won’t be one to miss.
[xyz-ihs snippet=”HN-300×250-TextnImage”]