Dwyane Wade on LeBron’s Return: ‘I Think He Should Be Received Very Well’ 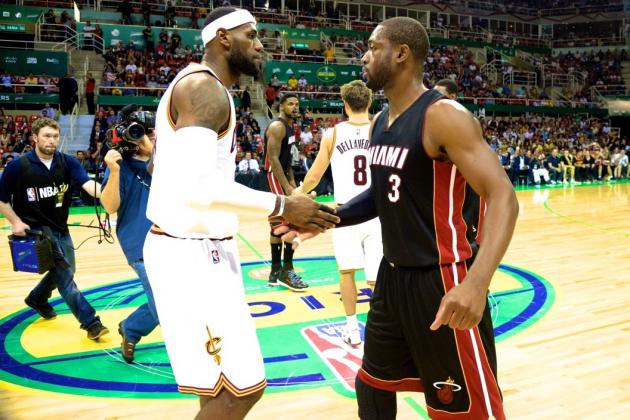 You can count Dwyane Wade as one of the few in South Florida who still supports LeBron James.

Just days before LeBron makes his return to Miami after jettisoning the Heat for the Cleveland Cavaliers this past offseason, Wade continues to support his former teammate despite the decision. However, he believes those at American Airlines Arena will give James a mixed reception when the two teams meet on Christmas Day:

The recent comments by Wade are in direct contrast to some of the comments that other Heat players such as Chris Bosh have made in regards to LeBron. Leading up to the Heat’s preseason game with the Cavs in Rio De Janiero back in October, Bosh was asked if he looked forward to seeing James:

“Yeah….I don’t know. I’m in the mode where I’m trying to lead my team, help these guys out around here. If guys aren’t in this locker room, I don’t have much time for them, if any.”

Mario Chalmers, who at times, was scolded by LeBron during games, remarked back in October that Cavaliers point guard Kyrie Irving would have to get used to James’ dominant personality:

While James was with the Heat, Miami advanced to four straight NBA Finals, with two championship victories in 2012 and 2013. LeBron was named MVP and Finals MVP in both of those seasons.

Wade remarked that he would never let the game of basketball get in the way of his and James’ friendship together:

“At the end of the day, this is a sport. And I would personally never let a sport come between the relationships I develop. That’s just not the person I am. So LeBron’s decision to go home didn’t affect our relationship at [any] point. We might even talk more now than we did the first time when he wasn’t my teammate. It’s just because we’re used to leaning on each other a little bit.”

The Heat will take on the Cavaliers on Christmas Day at 5:00 pm EST and the game will be broadcast on ABC.
[xyz-ihs snippet=”Responsive-Ad”]