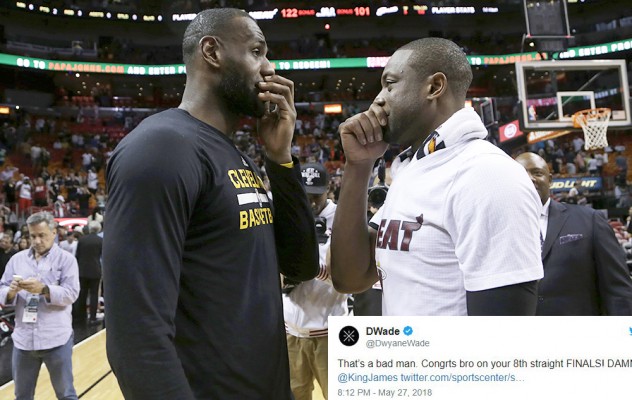 When LeBron James and the Cleveland Cavaliers won Game 7 of the Eastern Conference finals on Sunday night, it marked the eighth consecutive year that a James team had reached that peak. James’ close friend and former teammate Dwyane Wade took to social media after the game to offer both his congratulations and amazement at the accomplishment.

The first four trips during that streak came when James was wearing a Miami Heat jersey, with Wade alongside him each time. During that remarkable run, the Heat managed to win NBA titles in both 2012 and 2013, with James winning MVP accolades in the finals in both of those instances.

Besides the bond of friendship that they share, the two both have another championship ring among their possessions. Those titles came in separate situations a decade apart, with Wade helping the Heat to their first title in 2006 and James leading the Cavs to their only championship in 2016. In both of those cases, Wade and James also earned Finals MVP honors.

The two future Hall of Famers briefly reunited as teammates this year after Wade was bought out of the final year of his free agent contract by the Chicago Bulls. He subsequently signed with the Cavaliers, but was then dealt back to the Heat in February when the Cavs completely overhauled their roster.

Presently, Wade is contemplating whether to return for what would be his 16th season in the NBA. While he’s technically a free agent, he indicated earlier this year that his goal is to retire as a member of the Heat.
[xyz-ihs snippet=”HN-300×250-TextnImage”]