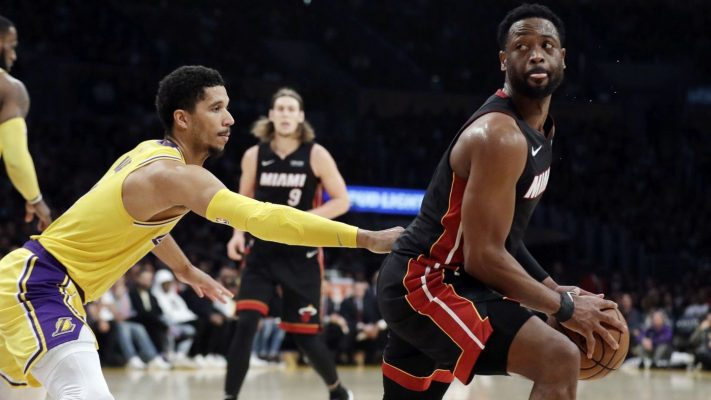 After Miami Heat legend Dwyane Wade competed against the Los Angeles Lakers for the last time in his career, the 36-year-old handed a significant commendation to Lakers youngster Josh Hart.

The second-year guard asked Wade for his shoes, and the 2006 Finals MVP reciprocated with a notable compliment:

Josh Hart asked Dwyane Wade for his game shoes tonight. Hart said he wears No. 3 in honor of Wade, his favorite player growing up. Wade wrote, “I love the way you play the game. Reminds me of me. Keep going.” pic.twitter.com/ljZ44IehXN

While the two guards had different paths to start their careers, Wade sees similarities in their games. Hart is having a solid second season in the league with averages of 9.1 points and 3.3 rebounds. Meanwhile, Wade is putting up 14.9 points, and 3.9 assists per game in the final year of his storied career.

When Wade entered the league, he was expected to become the face of the franchise and guide the Heat to a championship. The 6-foot-4 guard did just that by scoring at will and defending hard to help the Heat capture their first championship in 2006.

Hart, on the other hand, was brought in to be an auxiliary player to some of the stars on the Lakers. Yet, the 30th pick in the 2017 draft, is averaging more points than Lonzo Ball and is a fruitful, consistent contributor on the Lakers this season.

Before Wade gifted Hart with his shoes, the Heat icon gave Los Angeles fans one final, memorable game. While the Heat lost a close, competitive contest to the Lakers, Wade recorded 15 points, 10 assists and five rebounds in 32 minutes.
[xyz-ihs snippet=”HN-300×250-TextnImage”]