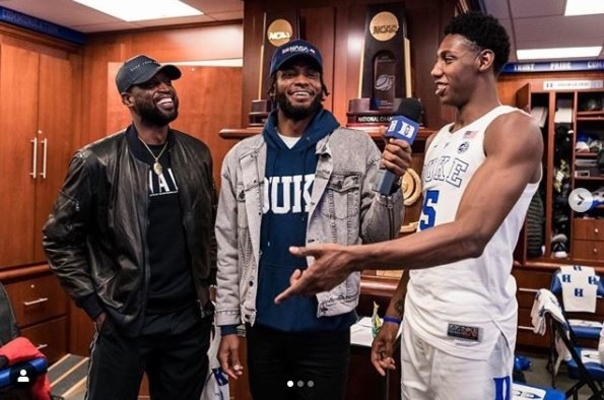 Despite being without star Zion Williamson, R.J. Barrett and the rest of the Blue Devils squad pulled out a 71-70 win over the Demon Deacons. Barrett finished with 28 points, five rebounds, and four assists.

#OneLastDance had to make a stop in Cameron Indoor Stadium #TheBrotherhood

Wade’s One Last Dance tour made a stop at Duke’s Cameron Indoor Stadium, even though Williamson wasn’t on the court. The freshman missed his fourth straight game because of a knee injury sustained back in February.

After the Duke win, the Heat guards were pictured smiling and laughing with Barrett, a freshman who will likely be a top-three pick in this year’s NBA draft. Winslow, a former Duke small forward, clearly had some words to offer the freshman who’s on his way to an early draft pick.

After three wins in the last four games, Wade and the Heat will take on the Charlotte Hornets on Wednesday night at 7 pm EST.
[xyz-ihs snippet=”HN-300×250-TextnImage”]