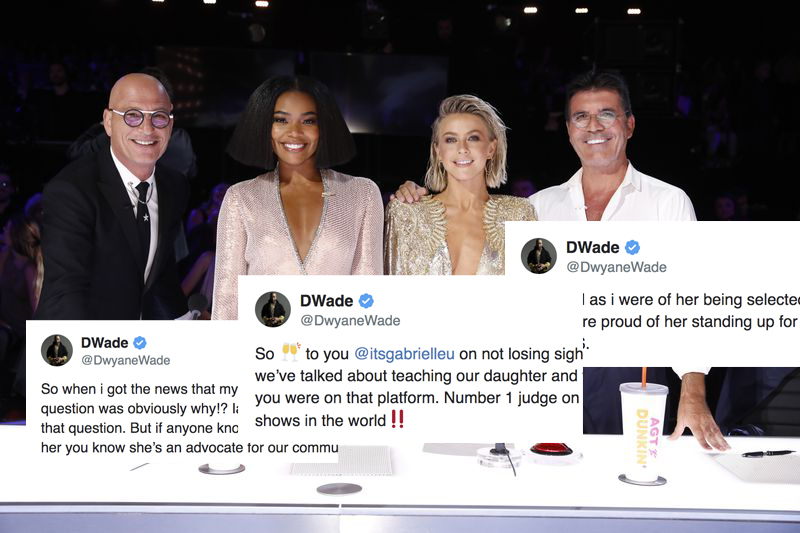 Last week, it was confirmed that Gabrielle Union, the wife of Miami Heat legend Dwyane Wade, had been fired from her job as a judge at “America’s Got Talent.”

Reports of a toxic workplace seem to be at the center of the ousting, but there have also been indications that Union fought back when she determined that some of the moves the show was making were racially motivated.

Always one to show support of his wife, Wade took to Twitter on Wednesday to speak out about the news.

So when i got the news that my wife was being fired—my first question was obviously why!? Iam still waiting on a good answer to that question. But if anyone knows @itsgabrielleu or have heard of her you know she’s an advocate for our community and culture.

As proud as i were of her being selected as a judge on #AGT— Iam even more proud of her standing up for what she stands for and that’s US.

So ? to you @itsgabrielleu on not losing sight of the lessons we’ve talked about teaching our daughter and for kicking ass while you were on that platform. Number 1 judge on one of the biggest shows in the world‼️

Per Wade’s tweets, it sounds like the reports of issues related to race were certainly involved. Yashar Ali of Vulture seemed to corroborate Wade’s message.

“Two sources say that Union also earned the reputation of being difficult because she asked contestants dressed in drag what their preferred pronouns were, a move that seemed to annoy producers,” Ali wrote. “But tensions hit an irrevocable high after an incident involving a 10-year-old black rapper named Dylan Gilmer. According to two sources, Union was told in a production meeting by producers that the show needed to pick an act ‘that America can get behind.’ Union objected to their suggestion that a dance group from Texas made up of white contestants could be that act, as it did not receive as much of an enthusiastic reply from the audience as Gilmer, according to two sources.”

He then revealed the repercussions of Union’s decision to stand up for the young performer.

“Union was frustrated, according to three sources. She felt producers were implying that American audiences couldn’t get behind a 10-year-old black rapper, a viewpoint she felt was racist,” he wrote. “But the decision was made to cut Gilmer from the show. (He later was a guest on The Ellen DeGeneres Show, and Tyler Perry gave him his own show on BET.) Union was so angry, according to two sources, that she went outside to get fresh air, and returned after about five minutes to find Cowell furious that she had left.

“A source close to the production told Vulture that Cowell later told Union that if it was that important to her, he would be willing to spare Gilmer. But other sources said Cowell was hostile and aggressive when he delivered that message, and at that point, Union had had enough.”

If these reports are true, it seems Union certainly was in the right the whole time.

Additionally, it also seems as though this may not be the last fans hear about this increasingly concerning report about the popular competition show.