Dwyane Wade: ‘I’m Really Excited About This Team, We’ve Got a Lot of Depth’ 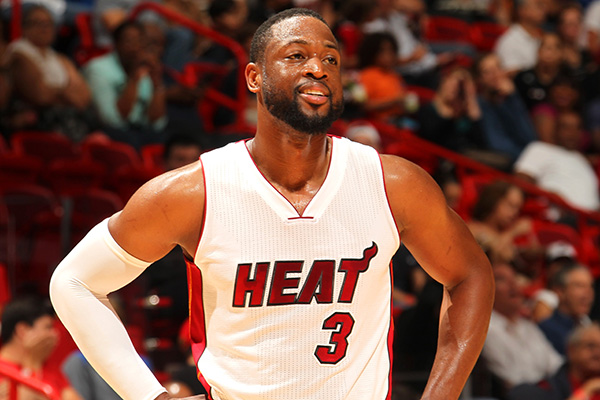 Count Dwyane Wade as one of the many who have high expectations for the Miami Heat this season.

Following his induction into the Greater Miami Chamber of Commerce Sports Hall of Champions on Wednesday night, Wade commented on his thoughts for this season’s team:

“We have a lot of work to do to get to where we want to be, to get into the playoffs and hope to compete for a championship. … [But] I really like this team. We’ve got a lot of depth. … I love playing with veteran guys.

“When you can add youth like Justise [Winslow] and … [second-round pick] Josh [Richardson], when you add those guys into veteran guys, it could be special. We have all the ingredients. We just have to make sure we mix it right. It’s going to be a long journey of highs and lows. Hopefully … we end on a high.”

Pat Riley made several moves in an effort to ensure the Heat don’t have a repeat of what transpired during the 2014-15 season. Just a year after making their fourth consecutive NBA Finals appearance, Miami missed the playoffs altogether in 2015.

Riley drafted Justise Winslow and Josh Richardson during the 2015 NBA Draft and proceeded to sign veteran pieces such as Amar’e Stoudemire and Gerald Green.

Though the Heat missed the playoffs for the first time in seven years, Wade believes it happened for a reason:

“Not saying I want to be out of the playoffs…there’s a reason for this. Hopefully, that reason shows its face this year.”

The 33-year-old shooting guard is coming off of a resurgent season in which he ranked third in the East in scoring. However, injuries continued to slow him down as he was limited to just 62 games.

“I will be turning 34 this year,” Wade said. “A lot of people didn’t think I would make it this long with the way I play. This summer was trying to challenge myself with my body.”

The Heat have high expectations for the upcoming season. If the team is to truly return to being a contender, it will need its veteran shooting guard to continue playing at a high level.
[xyz-ihs snippet=”Responsive-Ad”]
dwyane wadeFeaturedmiami heatNews Ticker
← Previous Story Chris Bosh: ‘I’ve Been Waiting Six Months to Play with Goran Dragic’
Next Story → NBA 2K16 Player Ratings Leaked for Miami Heat