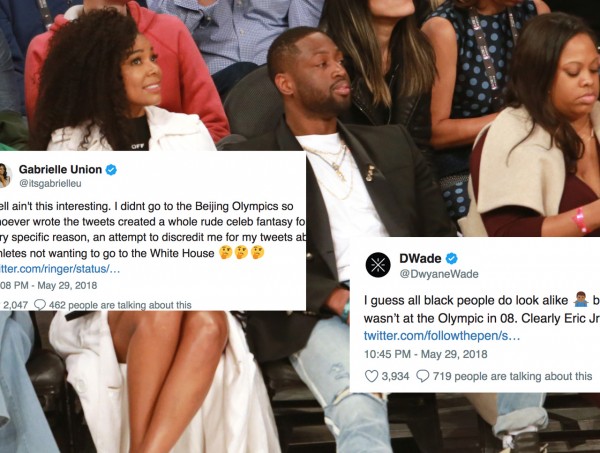 An investigation by Ben Detrick of The Ringer offered strong evidence that five different burner (or fake) accounts were used by Colangelo to offer anonymous criticism of 76ers management, coaches and players. In addition, other people within the NBA were targeted for attacks, with Wade and Union in the crosshairs on one occasion.

Colangelo’s apparent enmity toward Wade and Union (under the fake Twitter handle of “Eric jr”) stemmed from an alleged incident involving Wade during the 2008 Summer Olympics at a Beijing restaurant:

“In two responses to a February 2017 tweet from actress Gabrielle Union, who pointed out that Tom Brady didn’t visit the White House when Barack Obama was president, Eric jr went on the attack,” Detrick wrote. “‘I sat NEXT to you and [Dwyane Wade] at Beijing Olympics and saw you both being rude nasty to little kid fan,’ the account said. ‘Had to eat yr pizza. … You showed no respect to this little kid, who are you to stand on high grounds? Never looked at DW the same after that.’ During the 2008 Olympics, Jerry Colangelo (Bryan’s father), then the managing director of the U.S. men’s national basketball team, was in Beijing.”

In response to the controversy, both Wade and Union used Twitter to offer biting rebuttals to the claim. The most pertinent was the fact that Union wasn’t even there, with her relationship with Wade not beginning until the following year.

I guess all black people do look alike ??‍♂️ because @itsgabrielleu wasn’t at the Olympic in 08. Clearly Eric Jr lied ? https://t.co/Ofo48glcSw

Well ain't this interesting. I didnt go to the Beijing Olympics so whoever wrote the tweets created a whole rude celeb fantasy for a very specific reason, an attempt to discredit me for my tweets about athletes not wanting to go to the White House ??? https://t.co/OozdMUziPL

This is the tweet that got old boy's panties in a bunch. Since he couldn't argue with facts he created a scenario where the black athlete & actress are ungrateful jerks to children. Nice try kiddo. https://t.co/F5hLiaUAkn

Colangelo stated on Tuesday that he has a Twitter account, but has never used it. He also denied using burner accounts, including the one attributed to Eric jr. The 76ers have begun an investigation into the matter.
[xyz-ihs snippet=”HN-300×250-TextnImage”]