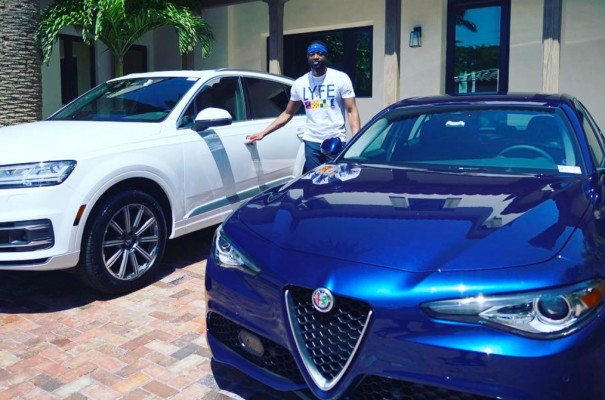 With the Chicago Bulls’ season coming to an end against the Boston Celtics last week, speculation of former Miami Heat guard Dwyane Wade‘s future is starting to heat up.

Wade, 35, has a $23.8 million player option for next season with the Bulls as part of the two-year contract he signed last summer after deciding to leave the Heat. That decision must be made before the July 1 start of free agency.

However, it looks like the three-time champion is dropping some cryptic clues as to what his decision might be. On Wednesday, the 14-year veteran posted a photo on Instagram saying that he’s “back home in Miami,” which subsequently sent social media into a frenzy:

Back home in Miami!!! So y’all know what that means. My team and family @thecollectionfl got me right. I’m about to hit these streets all summer in something new and fresh!

He also decided to retweet this hilarious depiction of a fan trying to decipher Wade’s recent string of obscure social media posts:

Wade said "back home in Miami" but he said he said he's "home" when he signed in Chicago but he also said "home is where the heart is" pic.twitter.com/fMA25hKxwA

The 12-time All-Star made some connections on Twitter too. Upon hearing Chad Johnson was in Miami, Wade responded to his tweet:

There’s no doubt the veteran is considering all options when it comes to his contract situation, including a return to Miami. Although Wade is nearing the end of his career, the guard has still been very productive. During the 2016-17 regular season, Wade put up 18.3 points, 4.5 rebounds, and 3.8 assists in 29.9 minutes a game.

A potential reunion with Miami would shake things up for the Heat, who have added several new contributors to the team. Two of those newcomers, Dion Waiters and James Johnson, are both free agents this summer. All signs point to the Heat aiming to bring back both guys and keeping last season’s core intact.

The Heat are expected to have about $37 million in salary-cap space once Chris Bosh‘s salary is cleared. That money would most likely go towards Waiters and Johnson with little wiggle room afterwards.

Fitting Wade into the equation could be a challenge. The guard has a guaranteed $23 million in Chicago if he wants to opt in, money the Heat likely won’t offer the aging star. It would take more of a sacrifice on Wade’s part as he would have to surrender his hefty player option and take less money to join Miami. But where else do you see “Wade County” ending his career?
[xyz-ihs snippet=”Responsive-ImagenText”]