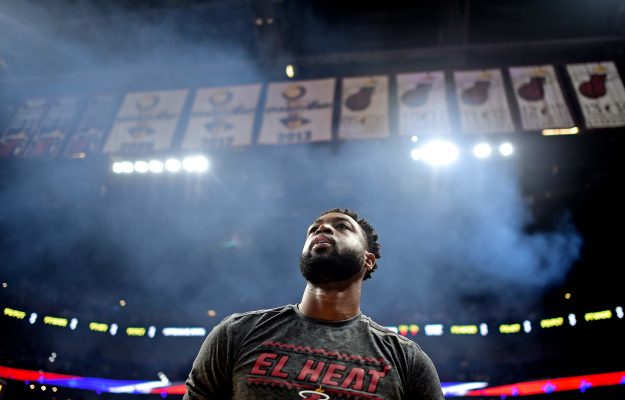 Dwyane Wade is just weeks away from the end of his NBA career as another player, but one end marks a potential beginning.

On Tuesday, the Miami Heat legend spoke with Barry Jackson of the Miami Herald to discuss his interest in one day owning an NBA team.

Understandably, owning the Heat is at the top of his wish list.

“Wade is very serious about this ownership thing, and he says the Heat will get first crack,” Jackson wrote. “It would need to be a minority role in Miami, because the Arison family has shown no interest in selling.”

Still, a minority stake would offer Wade the opportunity to play a real role in Miami’s front office.

Wade did admit that he wouldn’t want the responsibility of having final say on personnel decisions to start off.

Though he would certainly want to be a part of that process.

Wade then admitted that he plans to reach out to former NBA star and current NBA owner Michael Jordan among other current front office members who first entered the league as players.

“I will reach out to MJ,” he said. And “I have a relationship with [Lakers president of basketball operations] Magic Johnson and reach out to him.”

Jackson also spoke with Udonis Haslem, who has spoken with Wade about their mutual interest in an ownership role with the Heat or another team around the league.

“I would love for it to be the Heat but we haven’t been specific about a team,” Haslem said. “Our conversations have been more about owning a team, not owning this team.

“That would be amazing. I would never thought I would be owning Subways, Starbucks and Einsteins, so who’s to say that would be out of my cards? It’s definitely possible.”

Hopefully all of Haslem’s and Wade’s ownership dreams come true.

It would be an incredible next chapter to the two players’ incredible careers.
[xyz-ihs snippet=”HN-300×250-TextnImage”]