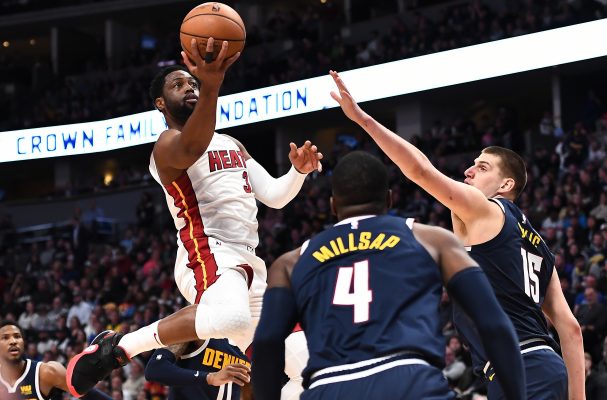 Miami Heat guard Dwyane Wade is currently in his 16th and final season in the NBA and has seen a number of changes in the how the game is played along the way.

As he enters the final few months of his NBA career, Wade spoke with Michael Lee of The Athletic to describe how his individual game would have been different had he entered the league today.

While Lee asserted that the game has evolved to a point where Wade could potentially be the last shooting guard to be the central component of an NBA championship team, Wade is confident that he would have thrived in any era.

“If they can’t touch me? People said I got a lot of free throws then. I would be more of a 3-point shooter, more like James [Harden], pull-up 3s or whatever. But I think my game would’ve been very successful and translated well to this open style, get your hands off me, let me go to work defense. I scored well when the pace was slow and the game was different.

“I did all right. I would’ve done all right in this era.”

Exactly what this era looks like was described by Hall of Fame guard Reggie Miller:

“It’s positionless basketball. That’s what the NBA has become, has evolved, has morphed into, but that’s what you’re seeing.”

Wade was more descriptive in offering his own opinion on how the game has changed over the course of his career:

“I think the power position shifts to who is the best player in the game. Right now the power positions are obviously small forward, with LeBron [James] and KD [Kevin Durant], and point guard, with Steph [Curry] and those guys. When I came in [Michael] Jordan had dominated, Kobe [Bryant] had dominated, and I fell right into the two-guard spot and after that, LeBron kind of changed the mentality of what everybody was looking for, like, ‘I want one of him!’”

Wade did express some uncertainty when asked who will follow in his footsteps as one of the NBA’s greatest shooting guards:

Regardless of which player does pick up that mantle, Wade is leaving after having made an indelible impact on the game. He can rightfully take his place among the greatest players of all-time, no matter what position is being discussed.
[xyz-ihs snippet=”HN-300×250-TextnImage”]