Dwyane Wade on Derrick Jones Jr.’s Impact This Season: ‘It Changes Our Team’ 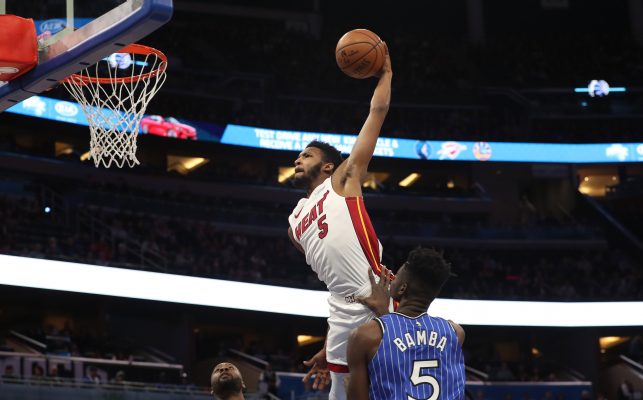 The energy and athleticism that Miami Heat forward Derrick Jones Jr. provides off the bench is unmatched by anyone else on the Heat roster. Other Heat players have begun to notice just how important Jones’ athleticism, which allows him to keep lots of plays alive, is to the team.

So far this season Jones is averaging 7.4 points and 4.5 rebounds in 18.5 minutes per game. Two of those 4.5 rebounds per game comes on the offensive end, which ranks 46th in the entire NBA.

Throughout the season, the UNLV product has put up numerous impressive performances, including when he went for 16 points and nine rebounds, seven of which were offensive rebounds, on Dec. 30 against the Minnesota Timberwolves.

Should he continue to perform at the level he has this season, Jones will undoubtedly earn more minutes from head coach Erik Spoelstra and end up becoming a key piece of the Heat’s future.
[xyz-ihs snippet=”HN-300×250-TextnImage”]