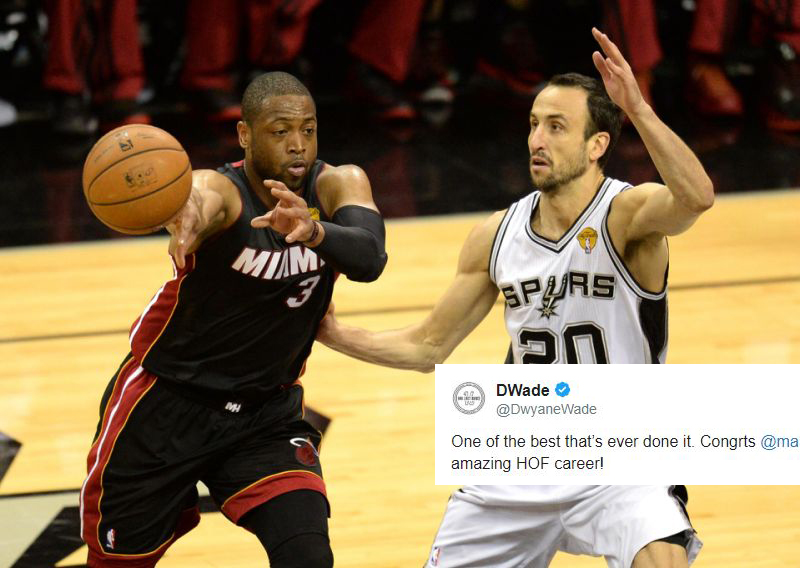 Dwyane Wade is likely thinking quite a bit about his own NBA legacy these days, but on Friday, the Miami Heat legend took to Twitter to celebrate the legacy of a different player.

Wade took the event as an opportunity to offer his own respects to Ginobili’s incredible career.

One of the best that’s ever done it. Congrts @manuginobili on an amazing HOF career! https://t.co/FtoHFV8N1D

Ginobili averaged 13.3 points, 3.8 assists, and 3.5 rebounds in his NBA career, but Wade knows first hand that the Argentinian national’s value did not only lie in numbers.

In back-to-back seasons Wade and the Heat faced off against Ginobili and the Spurs in the NBA Finals. The Heat won the first matchup in 2013 after an epic seven-game series. The following season, the Spurs beat the odds and dominated the Heat in a five-game series. In both series, Ginobili showed his ability to come up with incredibly clutch shots when they mattered most.

Now, with Ginobili’s jersey hanging in the rafters, and Wade’s career just weeks away from coming to an end, it’s clear that the past generation of NBA stars are smiling back at their careers.

Considering the way coaches, stars, and fans alike have responded to Wade’s farewell tour this season, it is likely there will be a similar outpouring of gratitude and admiration when Wade finally does hang it up for good.
[xyz-ihs snippet=”HN-300×250-TextnImage”]