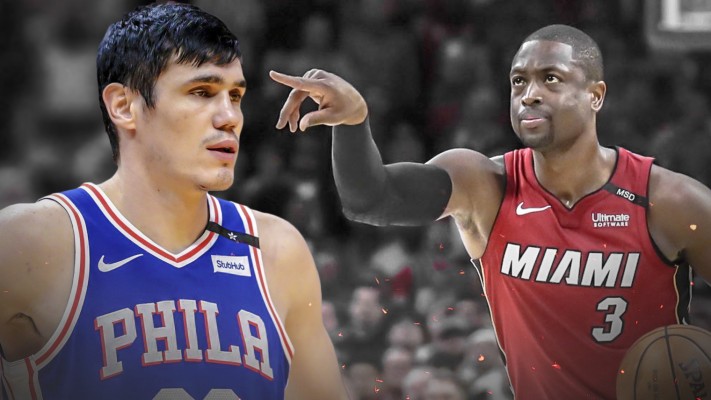 The playoff series between the Miami Heat and Philadelphia 76ers was marked by numerous instances of on-court conflict that often came close to actual fighting. However, even though the 76ers have advanced to the second round, one of their players is continuing a verbal battle with the team, something that led Heat veteran Dwyane Wade to deliver a biting putdown in rebuttal.

Ersan Ilyasova is a 76ers forward who’s in his 10th year in the NBA and possesses a very modest postseason resume. He remarked prior to the start of his team’s series against the Boston Celtics about the different atmospheres in American Airlines Arena and the Celtics’ home, TD Garden:

The Sixers know what they're in for in Boston. pic.twitter.com/h4z5GDcjRA

Ilyasova’s relative anonymity was cited by Wade as reason enough to discount his opinion, with the 15-year veteran also offering his apologies to the Heat fan base:

#HeatNation Let me apologize for this man that most of you don’t even know. He doesn’t know any better??‍♂️ https://t.co/s9noahPtaZ

The fact is that this season marks the first time in five attempts that one of Ilyasova’s teams has advanced beyond the first round of the playoffs. His 29 playoff games are in stark contrast to Wade’s legendary body of work, which consists of 177 playoff games, three league titles, five appearances in the NBA Finals and a finals MVP award in 2006 for his role in capturing the franchise’s first championship.

In each of those Heat playoff runs, the crowds at American Airlines Arena were raucous and enthusiastic, contradicting Ilyasova’s errant opinion about the support the team receives from its fans. Wade’s subtle burn should help endear him even more to Heat Nation.
[xyz-ihs snippet=”HN-300×250-TextnImage”]