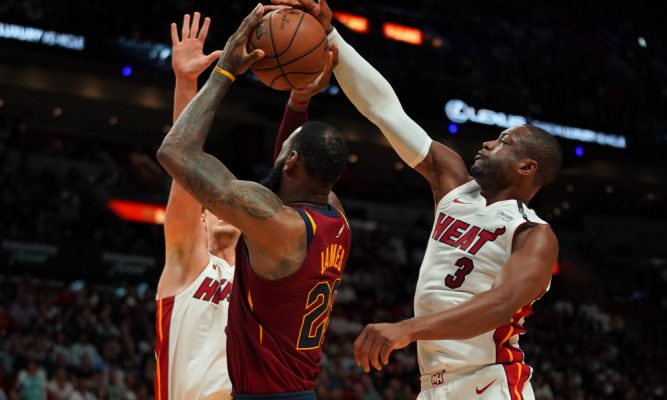 Throughout his career, Miami Heat guard Dwyane Wade has been constantly identified as one of the greatest shot-blocking guards in NBA history.

Now, Wade is just 28 blocks away from tying Michael Jordan’s NBA record for most blocks by a guard (893).

The Marquette University product mentioned that he wants to break Jordan’s record.

“Definitely would love it to get the No. 1 spot,” said Wade. “It’s not as easy in my old age to get 28 blocks, but I can see what I can do. I pride myself in that ability.”

Entering Tuesday’s game against the Milwaukee Bucks, Wade has recorded 865 blocks in his career, which is good enough for 125th in NBA history.

Over the course of his career, Wade has averaged over a block a game in six different seasons. His highest averages came in both the 2008-09 and 2011-12 seasons, when he blocked 1.3 shots per game during each season.

So far this season, Wade, who turns 37 on Thursday, is averaging 0.6 blocks per game.

If the three-time NBA champion, who will be retiring following the conclusion of this season, ends up setting a new record, it will be another way to prove just how good he has been throughout his entire career.
[xyz-ihs snippet=”HN-300×250-TextnImage”]