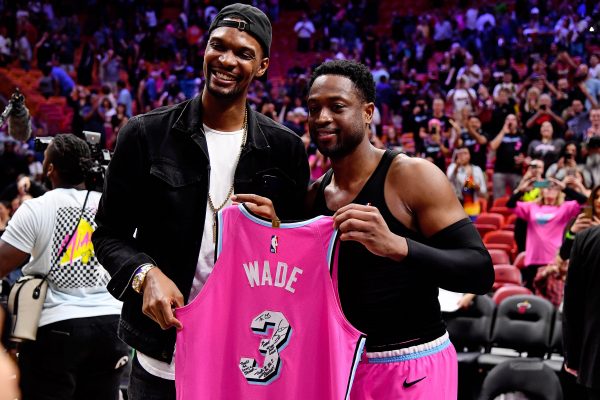 Chris Bosh has been around the Miami Heat organization quite a bit as of late, and Dwyane Wade thinks it should stay that way.

“Chris was going through a lot,” Wade said of his former teammate and close friend. “He was somebody who was one of the best players in the world, and he had a diagnosis that comes that no one is familiar with, really. It’s just a tough situation. You got a player who was 32 at the time, something like that, and the way the game is going, can play for a long time. It’s just unfortunate.

“So yeah, of course it’s going to take a lot of hardship to get out of that situation and get to where everybody is now. But the bigger picture, he needs to and should be a part of this organization. I’m glad to see him around.”

Bosh’s tenure in Miami was filled with the highest of highs and the lowest of lows. His first four seasons with the organization marked a time when Bosh, Wade, and LeBron James led the Heat to two NBA championships in four seasons. It wasn’t until the the 2016-17 season that blood clotting forced him to miss time. Following that season, the Heat announced that they had waived Bosh, ending his seven-year stint with the team.

At first, Bosh seemed intent to return to the NBA, even if the Heat did not want to take the risk of playing him. More recently, however, it seems Bosh is more than happy to return to the game of basketball regardless of it being quite clear that his playing career is over.

While it may feel like ancient history, Wade is well aware of the contributions Bosh has made to the Heat organization.

“We don’t have all of this without a Chris Bosh — all of the things that make us proud as a city, as a state and as an organization — without what he was able to bring to this franchise,” Wade said. “So things happen and I think the best part about it is when people put all ego and pride aside and come back together and understand it was special what we had and the relationship they had. I’m glad to see him back around, glad to see his family down the street from my family where I’m used to them being.”

Bosh hasn’t only been seen on the Heat sideline this season, he was also reportedly present at a team practice last month.

Wade isn’t the only player happy to have Bosh in the team facilities more often. Center Hassan Whiteside, who formed a strong bond with Bosh during his first two years with the Heat, remarked on his presence.

“It’s great to see him smiling,” Whiteside said of Bosh. “Having him around is great. I’m happy to have him around.”

With the talented, but young roster that the Heat are putting out on the court at the moment, the more veteran leadership, the better.

While it’s not entirely clear what role Bosh would have within the organization, it would be hard to find a player, coach or fan that wouldn’t welcome him back with open arms.
[xyz-ihs snippet=”HN-300×250-TextnImage”]