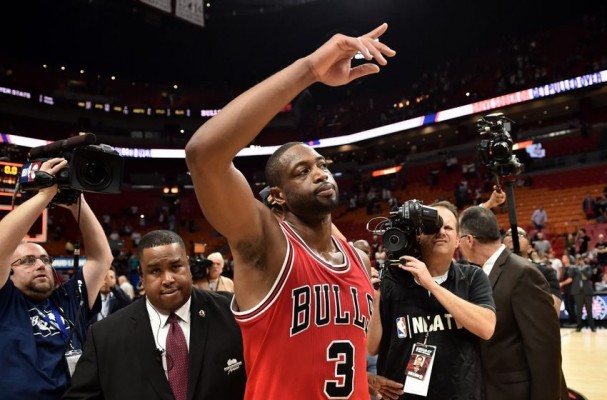 During his exit interview with reporters on Saturday, Dwyane Wade offered few clues on whether he will opt in for another season with the Chicago Bulls.

The 12-time All-Star insisted that he was going to keep all of his options open during the summer. His player option would allow him to play for another year in Chicago and earn $23.8 million, but Wade wants clarity on the direction of the Bulls franchise before he makes a decision:

“Same way you do when you decide to come and be a part of something, you talk about it, the same way,” Wade told media in Chicago about his meetings with Bulls management. “I’m sure it will be a few weeks, when they get all the information they need and kind of put the draft hat on, and all the other things together. But at some point, we will sit down and talk and I’ll see what direction they’re going in, and make a decision.”

The 35-year-old veteran admitted he might be more interested in playing for a championship contender instead of rebuilding a franchise from the ground up:

“There’s so many different variables that come into play, especially for me at this point in my career,” Wade said. “Like I said, I have a great luxury. I don’t need to ring-chase, but I can. It’s a great luxury to have if I want to do.”

Wade, statistically, had one of his worst years in the league last season, averaging only 18.3 points (worst since his rookie season) and shooting only 43.3 percent from the field (career-worst). Considering his age and diminishing scoring prowess, the longtime Miami Heat star is unlikely to earn anywhere close to $23.8 million on the open market.

Despite an up-and-down season with Chicago, Wade noted that he did not regret making the decision to leave the Heat after 13 years. In addition, neither Wade nor Heat president Pat Riley has ruled out the possibility of a reunion, but a decision of that magnitude will not be happening anytime soon.

“As a player, you can decide what you want to do. And I have a lot of money to decide if I want to take it or not,” Wade said on staying in Chicago and earning $23.8 million next year. “It’s not a bad thing, because I worked my butt off for it over my career, so no rush in my mind. I don’t have to think about it right now. I’ve got at least a month before my mind starts going there.”

The Heat will have their own priorities of signing free agents this offseason, but if Wade chooses to enter the open market there might be the possibility of a Miami return.
[xyz-ihs snippet=”Responsive-ImagenText”]