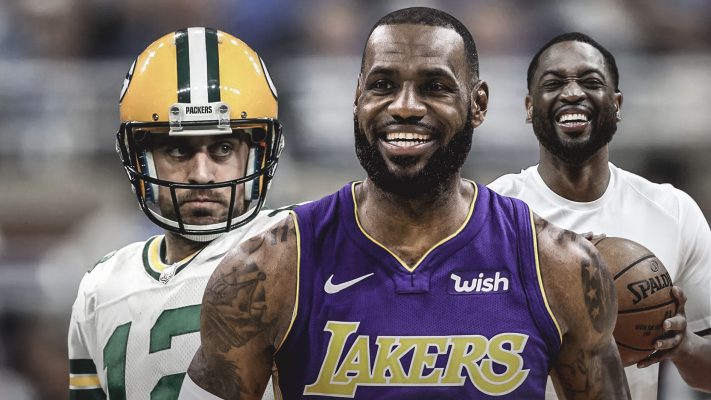 The friendship between Miami Heat legend Dwyane Wade and his former teammate LeBron James has been tight for more than a decade due to a number of different factors. Among those is the apparent ability to think alike, which again took place on Monday morning, when they both took time to acknowledge the athletic exploits of a player in a different sport, football’s Aaron Rodgers.

That’s funny because i woke up saying to myself @AaronRodgers12 you’re incredibly good at football but sir why my Bears alllll the time. https://t.co/2O8SJvyMUZ

The 34-year-old Rodgers has been the starting quarterback for the NFL’s Green Bay Packers since 2008 and, like Wade and James, has built up a resume that has him destined for his sport’s Hall of Fame. On Sunday night, Rodgers further enhanced his legacy by leading his team to a dramatic comeback victory over the Chicago Bears by throwing three touchdown passes in a 24-20 victory.

The Packers trailed 20-0, with Rodgers having left the game in the second quarter with a knee injury. He returned after halftime and then threw all of his scoring passes in the final quarter. The last of those was the winning score that came with just over two minutes remaining in the game, a fact that pained Wade, who grew up in the Chicago area and has remained a Bears fan.

Wade and James spent four years together as members of the Heat from 2010 to 2014, reaching the NBA Finals in each season. In both 2012 and 2013, the Heat managed to capture league titles. Last season, the two reunited as members of the Cleveland Cavaliers before Wade was dealt back to the Heat in February.

While Wade has yet to make an official decision about whether or not he’ll return for his 16th NBA season, recent reports appear to indicate that he will again suit up in a Miami uniform. James left the Cavaliers as a free agent in July to sign a multi-year deal with the Los Angeles Lakers. When Rodgers does enter the Pro Football Hall of Fame, James will likely not have far to travel to watch since the shrine is located in Canton, Ohio, a short distance from James’ hometown of Akron.
[xyz-ihs snippet=”HN-300×250-TextnImage”]