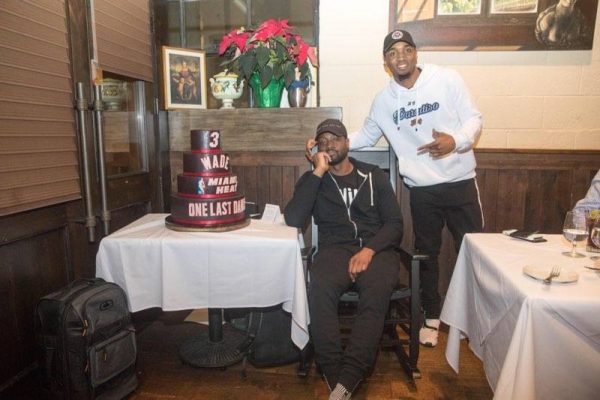 Dwyane Wade’s farewell tour is being billed as “One Last Dance” and on Tuesday night, Donovan Mitchell gave Wade a gift to commemorate his final season. The Utah Jazz guard gifted Wade a rocking chair — a sly roast of Wade’s age.

At a private #OneLastDance dinner on Tuesday night in Utah, Donovan Mitchell gifted Dwyane Wade with a rocking chair.

Both men, more than players, are standup individuals and excellent role models. Oh, and funny as hell. pic.twitter.com/NyaZPO8jnr

Wade doesn’t appear amused by his gift, but he has a good sense of humor, so he was willing to pose for a picture with Mitchell. This is high-level trolling from Mitchell, but time stops for no one. Eventually, Mitchell will be preparing for his retirement and perhaps a young star in the league will pull this same move on him.

The Jazz guard is emerging as one of the best young players in the game, even drawing comparisons to Wade at times. His shooting percentages are down slightly this season, but he’s still learning how to adapt and adjust to the different types of coverages defenses are throwing at him.

Having Wade as a mentor is a great thing for Mitchell. Wade has a wealth of NBA knowledge and knows how to handle the spotlight as a rising star. Wednesday night will mark the final time that Wade and Mitchell take the floor against one another. Despite Mitchell’s gag gift, there is definitely mutual respect between the two.
[xyz-ihs snippet=”HN-300×250-TextnImage”]