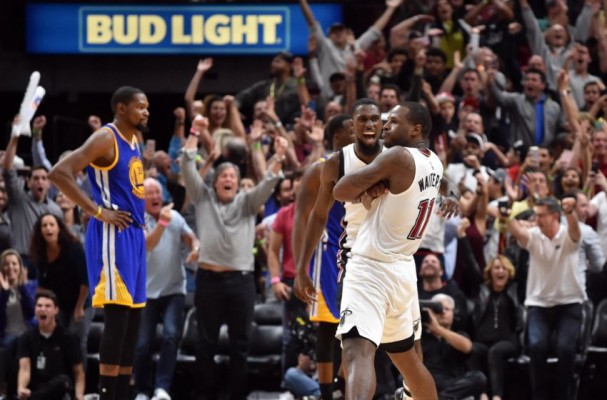 The furious rally that the Miami Heat put together during the second half of the 2016-17 season was fueled in large part by shooting guard Dion Waiters. That rally came just short of a playoff berth, primarily due to the slow start of the Heat, which was plagued with injuries throughout the campaign.

Waiters was one of those players hit by the injury bug and wrote in an article in the Players Tribune that former teammate Kevin Durant was lucky that his Golden State Warriors team (and presumably others) didn’t have to face the Heat during the postseason:

“I know Kev is reading this right now, like, ‘Thank God this dude is at home doing articles instead of lurking in the playoffs.’ You didn’t wanna see us, Kev!”

Just after the Heat had played a road game against the Warriors, Waiters and Durant had dinner together and Waiters displayed just how much confidence he had in Miami’s potential:

“When I came back in January, I was so locked in it was crazy. I kept telling everybody, ‘All we gotta do is win seven or eight in a row, and we’re right back in it.’

“Hell, I remember we played Kev and those boys in Golden State, and I had just come back. I was going at Kev hard that night, but they beat us. We went out to dinner after the game, and I told him, ‘Bro, we’re about to go on a run.’

“We got back home and won three straight, and then Kev and those boys came to our building. We gave ’em everything they could handle. We weren’t scared. I saw right away how Kev was playing me, like he was daring me to shoot the ball. I told him, ‘Bro, I’m feeling good. You see the last four games? Y’all in for a long night.’ We’re talking trash like we’re playing 1-on-1 back in OKC.

“Fourth quarter, 10 seconds left. Tie game. I got the ball in my hands with the game on the line, and I already knew what was gonna happen. F*** an overtime, let’s get up outta here. What’s the analytics on that? That’s a W. Then I hit ’em with the pose. People ask me all the time, ‘What’s that mean?’ It don’t mean nothing. It’s just the Philly in me.

“After that, we ripped off 13 straight. Nobody wanted to see us in the first round. Nobody.

“Look, I know we fell one game short of the playoffs, and it kills me. If I hadn’t gone down with an injury, I think we all know where we’d be right now. But you know what? The run this season was magical. Our fans sold out the arena every night, even when we were left for dead.”

Prior to signing with the Heat last summer as a free agent, Waiters met with Miami team president Pat Riley and was immediately impressed:

“When I got a call from Miami, I went down there and walked into the O.G. Pat Riley’s office. It was damn near the best thing that’s happened in my NBA career.”

Comparing Riley to Robert DeNiro’s character Ace Rothstein in the 1995 film, Casino, Waiters spoke about how Riley both challenged him and sought to find out more about his life off the court:

“I mean, I’m in the NBA. In my mind, I’m already in good shape. But do I eat a Philly steak every now and then when I’m home? You know I do.

“So Pat’s looking at me like, ‘Give us a season, and you’ll see. World-class.’ Even the way this man pronounces world-class is world-class, you know what I mean? And then he says to me, ‘Tell me something about Dion that I don’t already know. Not about basketball. About life.’”

Waiters then proceeded to tell Riley about his rough background that included both parents being shot, friends being killed and doubters discounting his chances all along the way. Eventually, Waiters made it to Syracuse University and was the fourth overall selection by the Cleveland Cavaliers in the 2012 NBA Draft.

In January 2015, Waiters was dealt to Oklahoma City as part of a three-team deal that resulted in the Cavaliers getting guards J.R. Smith and Iman Shumpert from the New York Knicks. Over the next 17 months, he and Durant formed their friendship.

Waiters signed a two-year, $6 million free agent contract with the Heat last summer, but can opt out of his deal to again become a free agent. While he could potentially leave for another team, Waiters is hoping to solidify his status with the team.

“Hopefully, we found a home down here. However it shakes out, this has been a hell of a ride this season, and now that you know a little bit about where I come from, and what I’ve seen, you know I’m being real with you when I say that I’m just thankful.”