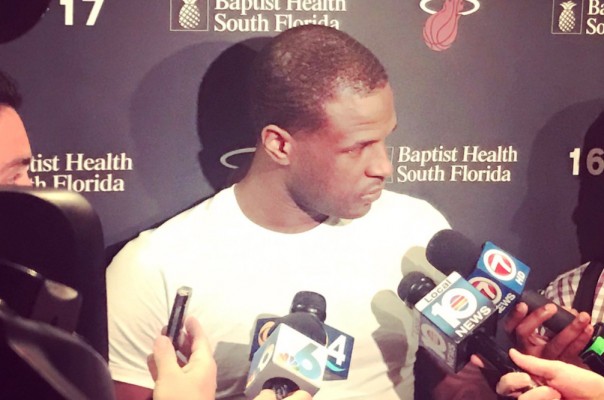 The status of Miami Heat guard Dion Waiters beyond this year is something that’s technically still in question, given the likelihood of his opting out of the second year of the contract he signed last summer with the team. However, Waiters publicly stated on Monday that he wants to remain with the team.

Dion Waiters says he wants to remain in Miami pic.twitter.com/Cwuj22FAvX

Waiters describes his first season with the team as “only the beginning”:

Waiters on HEAT tenure: “Only the beginning.”

However, he doesn’t feel any pressure to hammer out a new deal right now, with the start of free agency still more than two months away:

Dion on being asked if he wants to return: "Yeah, of course… It's April now. When July comes around we'll sit down and take care of it." pic.twitter.com/EUq5exePHM

One thing that makes a deal more likely is the level of trust that Waiters has in the organization, specifically in team president Pat Riley and Heat head coach Erik Spoelstra:

“Everything I talked to Pat about last summer came to fruition. And one thing about Pat — he’s a man of his word…..I was able to play my game, I was able to show different aspects of my game,” Waiters said. “I was able to be in a position where Coach trusted me with the ball in my hands in late game-situations. If I was on a different team, I probably wouldn’t have in position to take that shot. So, it’s a blessing.”

Waiters also expressed the frustration of not reaching the postseason, despite the team’s strong second half. He also indicated that the Heat likely would have been a dangerous foe had they gotten into the playoffs:

“I wanted to get in the playoffs so bad. Just to show people we’re really that good. We’re a tough team,” Waiters said. “Anybody who would’ve played us would have been in a dogfight every night.”

The 6-foot-4 guard was scheduled to make $3 million next season for the Heat, but figures to make much more once a final deal is signed.
[xyz-ihs snippet=”Responsive-ImagenText”]