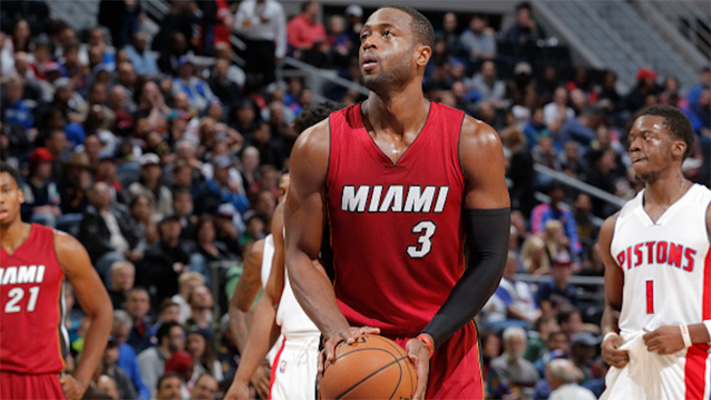 Dwyane Wade is less than two months away from turning 34 years old.

The injuries and the wear-and-tear have piled up on Wade’s body as he plays through his 13th season in the NBA. What hasn’t changed however, is the fact that Wade remains the Miami Heat’s go-to player when they need it most—the veteran ranks second on the team in scoring with 17.1 points per game and second in assists per contest with a 4.4 average.

While Wade will have nights where he struggles more often than he did earlier on in his career, such as the 1-for-9 shooting performance in a lopsided loss to the Detroit Pistons, TNT analyst Chris Webber believes that Wade’s last years in the NBA will more so resemble the San Antonio Spurs’ Tim Duncan rather than the Los Angeles Lakers’ Kobe Bryant:

“It’s the difference between, let’s say, Kobe Bryant and a Tim Duncan…I think whatever a team does, it’s not only a rebuilding of expectations, it’s a rebuilding of mentality. And I think what’s great about this Miami team is you know it’s a Pat Riley team. And even if it’s to build around these guys until you find those new superstars to be ushered in, rookies that come in as high picks, they’d love to have a Dwyane Wade or a guy that’s done it to be their mentors.”

What Webber was of course referencing was how the Spurs continue to be a top-tier team in the NBA with Duncan remaining a focal part of the team as a starter. On the other hand, Bryant is struggling drastically from an individual standpoint as the Lakers are the second-worst team in the NBA with a record of 2-13.

While Wade’s efficiency has declined to 41.3 percent shooting from the field through the first 14 games of the season, Heat president Pat Riley continues to surround the veteran with one of the best supporting casts in the league. A great organization is one of the main reasons why Duncan has been able to enjoy the success and longevity that he’s currently experiencing even in his 19th year in the league.

Wade has already shown in the past that he’s willing to take less money and accept a lesser role on the team for the good of the franchise.

As Webber noted, as long as the organization continues to surround Wade with talent, there is no reason why the shooting guard shouldn’t close out his career the way Duncan is currently closing out his.
[xyz-ihs snippet=”Responsive-Ad”]