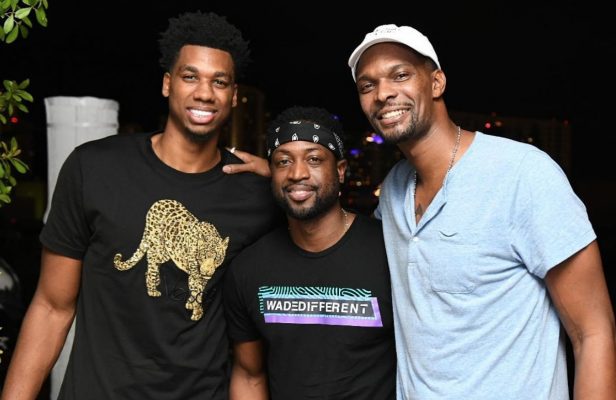 Even though Miami Heat guard Dwyane Wade doesn’t celebrate his 37th birthday until Thursday, his close friend and former teammate Chris Bosh made sure to send his best wishes along via social media.

He included a simple message with a photo of the two, along with Heat center Hassan Whiteside.

Happy birthday to my guy @dwyanewade | A stand up guy and a great friend. Heres to many more my brother !

Bosh joined Wade and the Heat as a free agent in July 2010 after playing his first seven seasons in Toronto. That duo was joined by another free agent acquisition, former Heat forward LeBron James, helping to turn Miami into a juggernaut team. What followed were four consecutive trips to the NBA Finals and a pair of league titles in 2012 and 2013.

James left to return to Cleveland in 2014, with Bosh then experiencing some scary life-changing moments during the next two years. In February 2015, he developed a blood clot on his lung, abruptly ending his season after just 44 games.

The following year, Bosh played in 53 games for the Heat before a blood clot in his leg once again sidelined him. That turned out to be the end of his playing career, though Bosh has hinted that he could return and has thus far not officially announced that he has retired. However, the likelihood of any team signing him is extremely remote, considering the potentially fatal consequences from such a decision.

Wade will be joining Bosh on the sidelines following this season, having announced his pending retirement last September. While he’s in his 16th NBA season, the guard continues to be productive for the Heat, averaging 13.9 points, 3.9 assists and 3.5 rebounds per game. He’s also been the recipient of adulation from opposing players and fans, which will likely pale in comparison to the cheers he’ll receive when he’s honored by the Heat later this season.
[xyz-ihs snippet=”HN-300×250-TextnImage”]