Don't Miss
Home / Media / Chris Bosh on Return: ‘Nothing Was Taken Away From Me, I’ve Only Gained’

Chris Bosh on Return: ‘Nothing Was Taken Away From Me, I’ve Only Gained’ 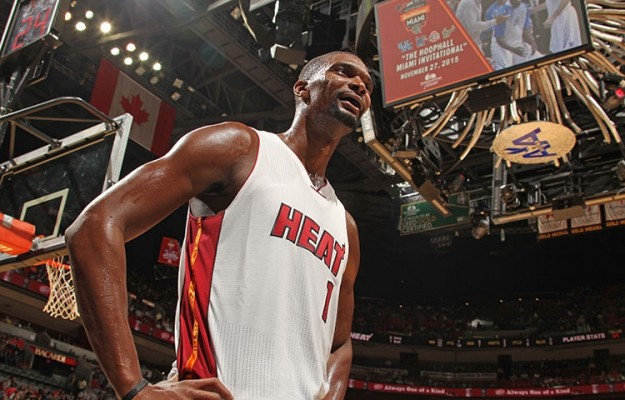 Chris Bosh made a successful return last night in the Miami Heat’s preseason opener versus the Charlotte Hornets.

It was his first NBA game in nearly eight months since suffering a serious blood clots ailment that ended his season and caused serious risk to his life.

The veteran big man ended up scoring a team-high 14 points and made his first three shots from the field in the 90-77 loss to the Hornets.

Despite the preseason opener marking his first game since his ailment, Bosh downplayed the significance of his return:

“It was normal—back doing my job. I understand everybody’s [wondering], ‘How did it feel like? What was it really like to finally play?’ If you put a fish back in the water, it’s going to swim. Nothing was taken from me. I’ve only gained.”

During the All-Star break of the 2014-15 season, Bosh was hospitalized for nine days to treat blood clots that had made its way into his lung, along with an infection that left fluid backed up in his chest.

He would be placed on blood thinners and ended up missing the final 30 games of the season. He finished the year appearing in just 44 games, the lowest total of his 12-year NBA career.

Head coach Erik Spoelstra spoke of how remarkable Bosh’s return was considering where he was back in February due to his ailment:

“You really have to take these moments and just be grateful for him—not take him for granted, but be so wrapped up in your business that you can’t appreciate how awesome that is. Where he was when I saw him in the hospital bed last February, and then to get him out there right now—he looked great.”

Dwyane Wade, who is going on his sixth season as a teammate of Bosh’s, remarked that it was encouraging to see his friend back on the court on Sunday:

“The biggest thing is to see him like he never left. I asked him if he was nervous before the game, and he told me that he was just excited. You never miss stuff until it is gone, and he missed it a lot. We were all happy that he got an opportunity to go out there and play the game he loves.”

Heat Nation is certainly happy to see the 10-time All-Star back on the court.

Now that the veteran big is healthy, the Heat hope to return as championship contenders for the 2015-16 season.
[xyz-ihs snippet=”Responsive-Ad”]