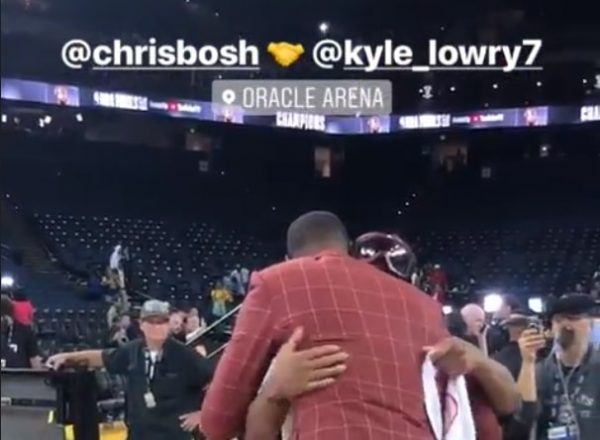 Before two-time champion Chris Bosh was with the Miami Heat, he was a star on the Toronto Raptors.

Although Bosh couldn’t deliver Toronto a ring, the Raptors icon has been supportive and around the team on their championship quest this postseason.

After the team won it all on on Thursday night, Bosh and Raptors point guard Kyle Lowry shared an emotional embrace.

Lowry, 33, is the longest tenured Raptor in the team’s history. The point guard leads the organization in career playoff games at 73.

In comparison, Bosh, who was once the franchise’s all-time leading scorer, only played in 11 playoff contests with the Raptors. Yet, both stars have played crucial roles in helping the franchise get to where they are now.

While Lowry and Bosh never teamed up in Toronto, it is clear that they both know how much a championship means to the city.

In the Raptors Game 6 victory over the Golden State Warriors, Lowry set the tone early and put the team on his back. –

After scoring 15 points in the first quarter, Lowry finished with 26 points, 10 assists, seven rebounds, and three steals in 42 minutes of play to lead the Canadian collective to their first-ever championship
[xyz-ihs snippet=”HN-300×250-TextnImage”]